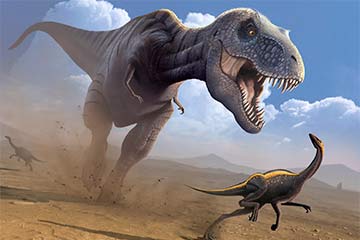 This computer artwork shows a Tyrannosaurus rex dinosaur hunting an Ornithomimus dinosaur. The T. rex was among the largest carnivorous dinosaurs but was not a swift runner.
© Mark Garlick/Science Photo Library/Corbis

Let's start off this article by saying that we realize we'll never have a definitive answer to this question. There's obviously no way to test it, however fun it would be to hop into a time machine, blast back to the Cretaceous period and challenge the nearest Tyrannosaurus rex (T. rex) to a 100-meter (109-yard) dash. We'll just have to be satisfied with conjecture about what would happen in such an amazing situation.

We do have real numbers to work with, though. Scientists at the University of Manchester in England actually computed the top speed of a T. rex using animated computer models based solely on information gleaned from fossils. They were able to estimate muscle mass and predict how dinosaurs used those muscles to move their bodies. And based on that, they computed the running speeds of many dinosaur species. With a maximum pace of about 18 mph (29 kph), the T. rex didn't come close to being the fastest dinosaur — that honor went to the chicken-size Compsognathus, which clocked in at 40 mph (64 kph) — but it was fairly swift [source: Sellers].

Usain Bolt, the world's fastest man, reached a top speed of 27.79 mph (44.16 kph) when he set the world record in the 100-meter sprint in 2009 [source: BBC]. A four-minute miler runs 15 mph (24 kph). So, on paper, the T. rex is going to crush the average human in a race. But as long as we're playing this suspension of disbelief game, let's be "realistic" here. You're not going to be running a friendly race against this T. rex. You're going to be running for your life.

In a predator/prey scenario, your relatively tiny size gives you the advantage. The T. rex has you beat in pure speed, but even if you were racing from a starting line, you'd have a healthy lead before the dinosaur even got its massive body into proper running position. If you were just wandering around in Dinosaurland, you'd likely see the T. rex coming way before it sees you, so you'd again have a good head start.

Once it's spotted you and started the chase, the T. rex would gain on you fast, given its relatively enormous stride. It would probably get exhausted pretty quickly, though. How long do you think it could keep up that 18 mph pace? Usain Bolt certainly couldn't hold his top speed for 100 meters, and he's about one-hundredth the size of a 17,600-pound (8,000-kilograms) dinosaur [source: Hutchinson].

Of course, you probably couldn't hold your top speed for very long either. But you'd also have agility on your side — that lumbering T. rex would undoubtedly not enjoy trying to keep up with your zigzagging and sudden changes of direction. You would probably win the endurance game, too. Humans (well, some of them, at least) can run miles upon miles. Could a 17,600-pound dinosaur come anywhere close to finishing a marathon? The effort probably wouldn't be worth the payoff of such a small meal. It'd give up after a while and go find some bigger, less nimble prey.

So here's our final, very scientific, conclusion: the T. rex could run faster, but you could outrun a T. rex. At least you'd hope you could ...