Browse the article How the Coelacanth Works 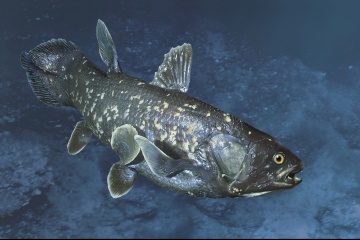 The coelacanth provides a glimpse into the past — it hasn’t changed much since prehistoric times.
Hoberman Collection/UIG via Getty Images

Sixty-five million years ago, when dinosaurs roamed the earth, carnivorous fish that could stretch up to 6.5 feet (2 meters) long and tipped the scales at about 200 pounds (91 kilograms) filled the seas. These mysterious creatures were called coelacanths (SEEL-uh-kanths), and there were 90 species of its kind. Their craniums contained a mere speck of brain matter — the brain occupied only 1.5 percent of the cranial space and the other 98.5 percent was fat [sources: National Geographic, Smithsonian].

Everyone assumed coelacanths went the way of the dinosaurs and faded into extinction. But in 1938, one was discovered in the waters off of Africa's east coast. A second species of coelacanth was found in 1997 in Indonesia. Scientists speculate the two groups were separated from each other for several million years [source: Smithsonian].

It's difficult to know just how many coelacanths are out there today. For one thing, they can live as deep as 2,300 feet (700 meters) below the ocean's surface. Yet scientists believe there are no more than 1,000 of the Indonesian-based species alive today and few of the African coelacanth. Both groups are on the endangered species list [sources: National Geographic, Smithsonian].

That means you won't be able to nosh on one anytime soon (in case you were wondering how a prehistoric fish tastes). But that's a good thing, because they supposedly taste quite nasty. Further, dining on coelacanth flesh can actually make you sick, thanks to its copious amounts of oil, urea (ick!) and wax esters, to name but a few of its repulsive features [source: Bates]. They've also got slimy skin and scales that ooze mucus. Bet you're not so hungry for a taste of prehistoric fish anymore. 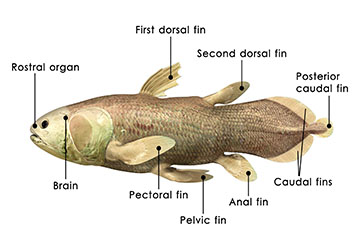 The discovery of the coelacanth is a bit miraculous when you consider the two main players in this drama: Marjorie Courtenay-Latimer, a young curator at a natural history museum in East London, South Africa, and J.L.B. Smith, a chemistry professor and amateur ichthyologist who worked at Rhodes University in nearby Grahamstown. While neither was an expert in ancient fish, both almost instinctively knew they'd stumbled upon something quite important.

It was Dec. 22, 1938. The manager of a local trawler fleet called Courtenay-Latimer to see if she wanted to examine a load of fish hauled in that day, in case there were any worthy of display in her museum. Tucked amid the haul, which consisted mainly of sharks, was an intriguing blue limb-like fin. It was attached to a 5-foot- (1.5 meters)- long, heavily-scaled, blue-gray fish. The fish weighed 127 pounds (57 kilograms) and was alive when caught. Although neither Courtenay-Latimer nor the fishermen knew what it was, she felt it was significant and took it to the museum's taxidermist. She also contacted Smith, a friend and honorary curator of fishes for small museums in the area, and sent him a description and sketch of the fish [source: Tyson ].

Smith was captivated by the extraordinary fish, too, later writing, "I told myself sternly not to be a fool, but there was something about that sketch that seized on my imagination and told me that this was something very far beyond the usual run of fishes in our seas." [source: Tyson ].

But Smith couldn't easily travel to East London to see the fish — remember, this was South Africa in the late 1930s — and the pair's flurry of correspondence about what to do with the now-dead fish often crossed in the mail. So unfortunately, the mystery fish's skeleton and gills, important for positive identification, were thrown out. Still, once Courtenay-Latimer sent Smith several of its preserved scales he was able to determine it was a coelacanth. The fish was subsequently given the scientific name Latimeria chalumnae in honor of Courtenay-Latimer's role in its discovery [source: Tyson ]. 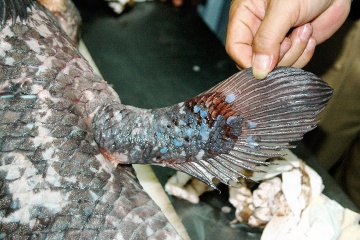 Could this limblike fin provide a clue to the missing link between sea creatures and land animals?
Ronan Bourhis/AFP/Getty Images

You know those Darwin fish bumper stickers — the ones where the fish have legs to indicate man's evolution? Well, the coelacanth is potentially critical to our understanding of how creatures walked out of the sea and onto the earth. That's because it has four fins, or lobes, sticking out of its body like legs. Even more fascinating, it moves those fins in an alternating fashion that resembles walking or trotting. But coelacanths aren't predecessors of tetrapods, or four-legged animals that live on land. Thanks to an analysis of the coelacanth genome, we now know that tetrapods have more in common with lungfish. Yet even if coelacanths occupy another branch in the vertebrate family tree, they're still important to our understanding of how creatures moved from water to land. For this reason, the coelacanth's discovery is considered one of the most important zoological finds of the 20th century [source: Bates].

Besides possibly aiding in explaining the water-to-land transition, coelacanths have some remarkable aspects. First, to help them eat super-sized prey, their jaws have a special hinge that allows their mouth to open wide. They also have a notochord instead of a spine. A notochord is a hollow, pressurized tube; in coelacanths, it's filled with oil. Vertebrates usually start life with notochords, but as the embryo develops, the notochord is replaced by the spine (vertebral column). Coelacanths are also pregnant for a long time — up to three years — and they give birth to live offspring, which is unusual for fish. Finally, scientists say the fish probably use electroreception to help sniff out their next meal and avoid swimming into various aquatic obstacles [sources: Phys.org, Bates]. 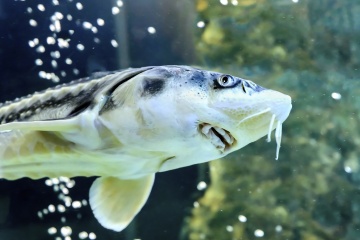 Living fossils are live entities — trees, bugs, animals, fish — that exist today in nearly the same form as they did millions of years ago. The coelacanth is considered the most famous living fossil fish, but it isn't the only one. Here are some other fossil fish that have swum under the radar [source: Krock].

Author's Note: How the Coelacanth Works

Coelacanths are interesting, I'll give you that. But I don't really like to think about ancient fish trolling the seas. Makes you wonder what else is down there.