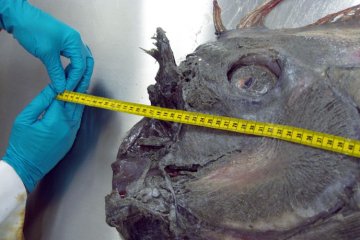 Now that's a noggin. A NOAA biologist measures the head of a giant oarfish that washed up in Southern California in October 2013.
Image courtesy NOAA

Ah, Regalecus glesne -- king of the herrings! Mistaken for sea monsters by centuries of sailors. Feared in legend and myth. What regal creature would have such a majestic history? R. glesne is what we call the giant oarfish, and it mostly resembles a colossal snake with a startlingly ugly mug. Stately this king is not.

To be fair, we haven't seen giant oarfish in their prime in the past few years. In October 2013 alone, two specimens washed up separately on the California coast, dead and bloated. They made the news in part because of their enormous size: Giant oarfish have been known to grow up to 36 feet (11 meters) and weigh 600 pounds (272 kilograms) [source: Bester] Unconfirmed reports have claimed a length of 56 feet (17 meters) [source: Howard]. The ones that washed up were mere trifles at 14 and 18 feet (4 and 5 meters), but with their bulging eyes and the red rays sprouting off their dorsal fin, you can see how "monster" might spring to mind. (And why Palauans refer to it as a "rooster fish.")

There are a few things to know about oarfish in general before we dive in to the nitty-gritty of our giant friend. One is that there are actually two different genuses of oarfish: Regalecus and Agrostichthys. Agrostichthys grows much smaller than Regalecus, and even the smaller Russelli species of Regalecus are reported to grow about 16 feet (5 meters) [source: Yamamoto]. But we're sticking mainly to our giant friends, since they're the most likely to haunt your dreams.

Speaking of dreams and other shadowy omens, we'll also discuss a long-held Japanese legend that says oarfish washing ashore portends an earthquake. Should we be running to the hills after the multiple beachings in October 2013? Surprisingly, a couple of theories give the legend credence.

Ready to get to know R. glesne? Read on.