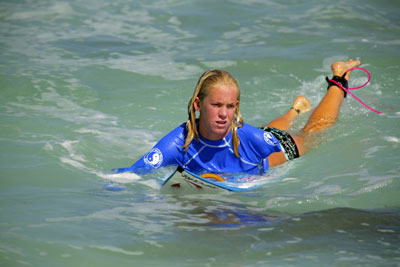 A shark's bite was strong enough to take Bethany Hamilton's arm while she was surfing at age 13. Hamilton (shown here in 2005) continued to surf competitively after recovering from her attack. See pictures of sharks.
Phil Mislinski/WireImage/Getty Images

We have something of a morbid fascination with shark attacks. The Internet is filled with Web sites that feature horrific photos coupled with harrowing stories of people who were attacked by sharks. The movie "Jaws" certainly didn't help sharks' image in the eyes of humans, with the title character mercilessly wreaking havoc on a small island town in coastal New England. Although moviegoers wanted to look away, "Jaws" became the 40th highest-grossing movie of all time in­ the United States (even if it was beaten by "Meet the Fockers") [source: IMDb].

The thought of being attacked by a shark is pretty awful. It's not just the gruesome aspect of being eaten alive -- shark attacks take place in the vast unknown of the sea. But shark attacks stories can also prove inspiring. Take the case of Bethany Hamilton, for instance. In 2003, the 13-year-old star surfer was catching waves off Kauai, Hawaii, when her left arm was cleanly bitten off just below the shoulder [source: CNN]. Undaunted by the attack, Hamilton kept surfing and has also since become a competitive snowboarder.

Stories like Hamilton's and other victims of shark attacks capture the imagination. They make for big headlines, but as it turns out, the chances of being killed or injured by a shark are actually less than being killed by lightning or injured from falling off a ladder [source: University of Florida].

Still, we just can't help but be fascinated by shark attacks. Perhaps it's the massive jaws, filled with rows of jagged, flesh-ripping teeth. Just from looking at the jaws of a shark, it seems like they could rip through a Volkswagen. But exactly how strong is a shark's bite? Find out on the next page.