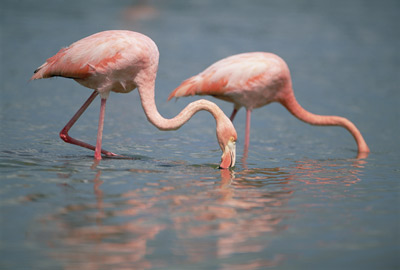 Flamingos are one of the few terrestrial animals to engage in filter feeding. See more pictures of birds.
Tui De Roy/Minden Pictures/Getty Images

Have you ever been so lazy that you didn't want to get up off the couch for a snack? Maybe you wished you could just open your mouth and have food enter? Nothing too big, of course, because you also don't want to put forth much effort to chew. Perhaps just a steady stream of crumbled crackers and cookies, popcorn or little pieces of cereal?

If this sounds appealing to you, then you might relate to filter feeders. Filter feeding is a method of aquatic feeding in which the animal takes in many small pieces of prey at one time. As opposed to predators who seek out specialized food items, filter feeding is simply opening up your mouth and taking in whatever happens to be there, while filtering out the undesirable parts. Filter feeders are mostly underwater creatures, although ducks and flamingos get in on the action as well [source: Hecht].

­But you, as a human, would only want to rely on filter feeding some of the time, right? Eventually you'd recover from your bout of laziness to grill up a fat, juicy steak or at least order a cheesy pizza. But some species, including a few of the biggest fish in the sea, spend their whole lives filter feeding. And though a number of creatures rely on ocean currents to bring by their dinner, for other animals, it's not about laziness. If anything, these creatures have to travel long distances to find something to eat, and they have unique bodily adaptations to get the job done.

So how do they do it? Why do they do it? Is it the ultimate diet, or just an excuse to eat all day? On the next page, we'll filter out just what's going on with these creatures. 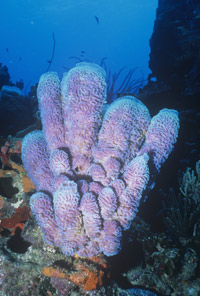 To learn more about dining under the sea, visit the links on the next page.