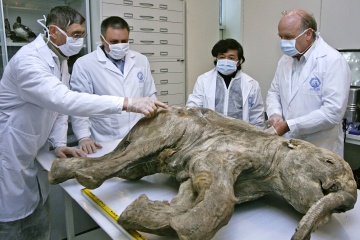 Imagine seeing dinosaurs or sabertooth cats — not in a museum but as living, breathing animals. The list of extinct animals that inspire our imaginations with the possibilities of de-extinction, or bringing a species back into existence, is longer than a mammoth's tusk. The science and technology for reviving some species have arrived, taking the idea out of science fiction and into the realm of possibility. But is reintroducing extinct species a good idea?

It's a hotly-debated topic among scientists, politicians, developers, conservationists, ethicists — really anybody who has a dog (or in this case an extinct animal) in the fight. The questions and problems surrounding de-extinction are many. Where would we put a reintroduced species? How do we increase species numbers sufficiently to ensure survival? How would current plants and animals be affected by the reintroduced species?

Let's use passenger pigeons as an example. They went extinct in 1914, not long ago in the grand scheme of life on Earth. Passenger pigeons are a prime candidate for de-extinction, and a project is already underway to try to revive them. After all, they were small and cute, so how much trouble could they be?

As it turns out, a lot. Passenger pigeons migrated and survived in enormous flocks of often millions of birds. They used their huge numbers as protection and as a way to overpower food sources. Their flock size probably had something to do with reproduction, too. The last passenger pigeons lived at the Cincinnati Zoo, where not one was able to reproduce. Another problem with reintroduction is that the huge swaths of forests that supported of the flocks passenger pigeons — one of the last flocks reportedly inhabited 850 acres in Wisconsin — don't exist in abundance anymore [source: Yeoman].

Other scientists counter these arguments by saying the passenger pigeon could be re-engineered so that it is able to reproduce and thrive in captivity and smaller flocks. But then is it really a passenger pigeon or some newly formed relative? And what about the millions of dollars and thousands of research hours that go into reviving an extinct species? Many people argue those resources would be better spent on saving species that are currently endangered. Advocates of de-extinction contend that the money and time spent on bringing a species back can be used to fuel the conservation discussion and save endangered species. Just imagine mastodons or dinosaurs at the zoo where people can see them, learn why they went extinct and learn about efforts to save animals now.

The arguments on both sides are valid, so the question may not be answered until the first species is successfully revived. We just can't know what all the ramifications of reintroduction might be. Rest assured, it's not likely to be a real-life "Jurassic Park."

What's the difference between a mammoth and a mastodon?
Stegosaurus: Body Like a Bus, Tiny Little Brain
The Massive Titanoboa Snake Once Ruled the Colombian Rainforest