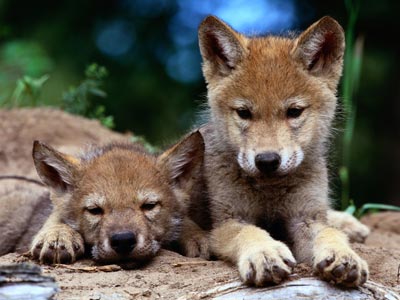 Before many American children know how to tie their shoes, they learn one thing: Wolves are scary. On account of the Brothers Grimm and "Little Red Riding Hood," wolves bear a terrible public image that they have yet to recover from. While we can thank the wild lobos for our precious pooches, we sure don't show them much love.

As people settled the West, giving way to farms and ranches, the tide turned against wolves. Feared because of their impressive fangs and penchant for snacking on livestock, more than 100,000 gray wolves were killed in Montana between 1883 and 1942 [source: Wilkinson]. Even in the 1970s, federal wildlife management still used poisons in the wild to kill off any stragglers [source: Bangs]. Only in the upper reaches of Minnesota and Alaska have wolf populations survived.

­­­While cattle and sheep farms benefited­ from fewer wolves, the lower wolf population sent a negative ripple effect within these predators' former ecosystems. Since gray wolves, also called timber wolves, are near the top of their food chain, they weed out the weaker game, allowing the stronger prey to survive and reproduce. In Yellowstone National Park, the wolves kept the number of elk in check, for instance. After people decimated the wolf population, the park's environment went through cycles of overgrazing because of the spike in elk and an increase in the number of old, sick ones [source: Wilkinson]. On top of that, smaller game, such as foxes and wolverines and eagles suffered because they eat the food scraps that wolves leave behind [source: Ewers].

­How did this wolf controversy pan out, and has wolf mistrust ever been resolved? Find out how and why wolves are making a comeback on the next page.

Return of the European Gray Wolf

Americans haven't been alone in their distrust of the wolf. Gray wolves inhabit many parts of Europe and have suffered similar extermination there as in the United States because of their predatory habits. In the 1990s, countries such as Germany began implementing wolf management programs in earnest to preserve and regrow the dwindling populations. Today, Eastern Europe is home to most of the continent's wolves. Europe's wolf population has risen, between 15,500 and 18,000 live throughout the region [source: Word Wildlife Fund].

Wolf Repopulation in the United States 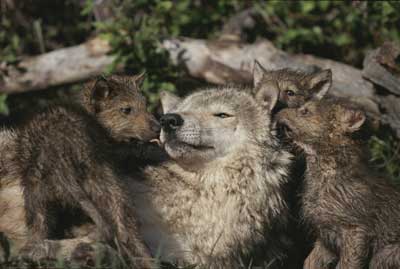 Wolves repopulated in the United States at an incredible rate, especially for an endangered species.
Norbert Rosing/Getty Images

The wolf's classification as an endangered species sparked a tug-of-war between conservationists wanting to restore balance in nature and the livestock industry looking to protect its livelihood. Despite fierce opposition from the latter, the U.S. government ruled in nature's favor.

It all started when specialists relocated 29 wolves from Alberta, Canada, to Yellowstone National Park in 1995. Officials from the U.S. Fish and Wildlife Service caught the wolves by using tracking collars and transplanted these animals to their new homes [source: Bangs]. After rehabilitating the wolves in pens at the park, the officials released them into the wild. The following year, 37 more wolves were brought into the wilderness of central Idaho.

Wolves don't reproduce like the clichéd rabbit. Many times, only the alpha female in the pack will bear offspring. Nevertheless, the gray wolf has repopulated at a faster rate than almost any other endangered species, chugging along at around 30 percent growth each year [source: Robbins].

But this environmental success hasn't come without a price. From 1987 to 2002, wolves slaughtered a documented 200 head of cattle, 600 sheep, 50 dogs, nine llamas and one horse [source: Robbins]. People have also reported instances of surplus killings, when packs attack more prey than they can consume, which is out of the ordinary for the normally economical eaters [source: Robbins].

Because of this mixed bag of effects, wolves have been simultaneously protected as an endangered and threatened species and managed when they get too close to homes or farms. To ensure survival of the transplants, the federal government stipulated that people could shoot the wolves only if they attacked [source: Bangs]. Also, many of the packs contain at least one wolf with a tracking collar that allows wildlife officials to quickly pinpoint the pack's location if any of the members are causing problems [source: Robbins]. To curb livestock predation, entire packs were taken out in Idaho and Montana, mollifying the ranchers and angering conservationists [source: Wilkinson].

What about their effects on wild animals? Remember those elk we discussed on the previous page? Big game hunters have been in quite a huff since the wolves have sliced the Yellowstone elk population in half [source: Robbins]. In Idaho, wolves have killed as much as 70 percent of the elk­ [source: Berg].

The gray wolf population has boomed since the reintroduction, and evidence exists of the wolves expanding their territory into north-central Washington [source: Cornwall]. Once its numbers crested above 1,500 in the United States, the federal government removed them from the endangered species list in March 2008.

The debate raged on, however, when Montana, Idaho and Wyoming passed laws to allow wolf hunting outside of national park grounds [source: Ewers]. In response, groups including the Sierra Club and National Resources Defense Council filed joint lawsuits to reclassify the wolf as endangered because of these hunting permissions [source: ­Berg]. In July 2008, a federal judge restored protection for gray wolves living in the northern Rockies under the U.S. Endangered Species Act [source: Brown]. Government officials could file an appeal to this ruling, continuing the back-and-forth dispute.

For more information about lobos and canines, check out the links on the next page.

How do leopards kill animals larger than they are?
Elephants Have a Special Alarm Sound: 'Humans! Run!'
A Smart Lemur Is a Popular Lemur