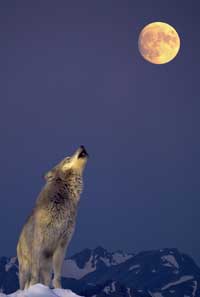 The wolf-moon connection has been around in folklore since ancient times. See more wolf pictures.
Art Wolfe/Getty Images

While camping in Yellowstone National Park, you fall asleep to a symphony of crickets and rustling leaves beneath a brilliant full moon. A little while later, a high-pitched moan snaps you out of your slumber. You hear the noise again, and it immediately registers -- a wolf's howl. "No need to worry," you think as you close your eyes, "that old canine is just yapping at the moon."

So where did this connection between wolves and the moon come from? Blame it on your ancestors' ancestors. Many ancient civilizations stretching back to the Neolithic Age continually paired wolves with the moon in images and literature, which eventually evolved into today's popular belief. Hecate, Greek goddess of the moon, kept the company of dogs. Same thing goes for Diana, Roman goddess of the moon and the hunt. Norse mythology tells of a pair of wolves that chase the moon and sun to summon night and day [source: Rosenberg]. The Native American Seneca tribes believe that a wolf sung the moon into existence [source: Henes].

Since wolves inhabit every continent except South America and Antarctica, their prevalence in human culture isn't surprising. As nocturnal animals, they have a natural association with darkness and the moon.

And just like humans whisper, shout, scream, murmur or chat to communicate, howling isn't the only way wolves vocally express themselves. Instead, they deliver short-range messages with three other types of vocalizations: barking, growling and whimpering.

The bark comes as no surprise since we're used to wolves' tamer descendents doing so. But as any dog owner can tell you, barks can have various meanings. For wolves, barks are either offensive or defensive. They may warn nearby pack members of an incoming predator. Or, they may call another wolf into a challenge. Lower-pitched growls signal dominance or an impending confrontation [source: Feldhamer et al]. For calmer occasions, a high-pitched whimper indicates submission. Wolves may whimper as a friendly greeting to each other, or parents and pups may speak gently to each other [source: Earth Expeditions].

But when they raise their muzzles toward the sky and release those wavering howls, is the message meant for the moon? Find out the answer on the next page. 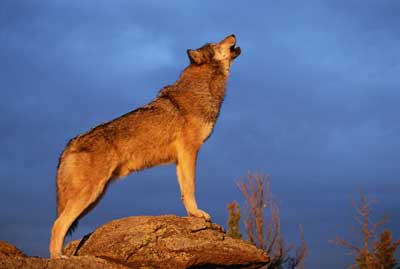 Humpback Whales Start Simpler Songs as Old Ones Get Too Complex
If a Woodchuck Can't Chuck Wood, What Can It 'Chuck'?
Why Is Ambergris (Whale Poop) So Valuable?