What is a lone wolf? 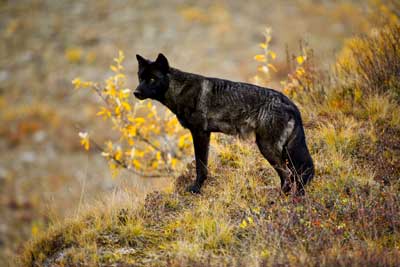 Wolf packs in general function similarly to The Three Musketeers' motto of "one for all, and all for one." The bonds within these canine groups seem as strong as glue in spite of intrapack fighting and fierce hierarchies. But individual wolves within the packs play unique and important roles that contribute to collective survival.

Alpha males and alpha females lead the pack, which usually includes their offspring and at times, a few other wolves. From there, the beta wolf is the lieutenant of the crew, assuming authority if an alpha dies. Traveling down the pecking order, we come to the omega wolf at the bottom. The omega is the runt, subordinate to all other pack members and regarded as comic relief. The dynamics of this unit are detailed more thoroughly in What is a wolf pack mentality?

This strict arrangement keeps the chain of command in place. For instance, lower-ranked wolves must display submissive body language such as crouching if a dominant wolf approaches. Except during times of prey abundance, only alpha males and females will mate. Even dinnertime involves special etiquette, with alphas getting the choice organs or meat, and the omegas waiting until the others have gotten their fill before foraging for scraps.

Speaking of food, the pack organization serves the important purpose of filling the wolves' bellies. When tracking large prey, such as moose, strength in numbers certainly makes a difference. However, the hunting patterns of the Ethiopian wolves in Africa stray from that custom. While Ethiopian wolves, on the brink of extinction, mostly adhere to a pack formation, they actually track down smaller prey solo [source: Williams]. Likewise, research has found that wolf pack members help to preserve the food [source: Mech and Boitani]. With multiple wolves dining, little goes to waste and the group setting keeps scavengers away.

But life in the pack isn't some idyllic wilderness summer camp. Contending with prey can inflict painful wounds, such as broken bones and fractured skulls [source: Busch]. Territorial showdowns within packs can also lead to injury and even death.

Just like the rigors of Army life may force a new recruit to quit during basic training, this regimentation of life in the pack can compel a wolf to set out on its own. But departing from the pack may be more difficult than enduring the challenges within it. Go on to the next page to find out what happens when a wolf goes it alone. 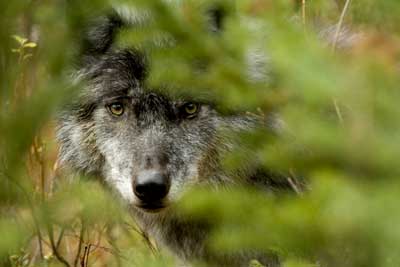 Lone wolves must be careful not to tread into enemy territory.
Robert Postma/Getty Images

When a wolf leaves its natal pack, or the one it was born into, it becomes a lone wolf. Wolf biologists also refer to this process as dispersal. In most cases, dispersal occurs between the ages of 1 and 2 years old, coinciding with sexual maturity [source: Feldhamer et al].

One significant factor that pushes a wolf to hit the road is aggression from the pack's dominant wolves [source: Whitt]. For instance, an omega wolf or a sickly alpha wolf that can no longer lead its pack may be picked on or physically challenged to the point of leaving the group. Especially when food is scarce, the weaker wolves may not receive adequate nutrition and leave out of necessity.

Both male and female wolves may disperse from packs, although males may do so more often in certain regions, such as south-central Alaska [source: Mech and Boitani]. Since wolves naturally coalesce into packs and enjoy social behavior, lone wolves are the exception rather than the rule. Studies have projected the number of dispersing wolves to make up less than 15 percent of the world's wolf population [source: Busch]. Lone wolves are more predominant in Europe, however, since prey is usually smaller [source: Busch].

Abandoning the pack also means leaving behind the protection other members offer. Because of wolves' territorial nature, loners must be cautious about trespassing into lands belonging to other packs. To safely find food, a lone wolf may need to search for hundreds of miles. Or, a wolf may float between the borders of pack territories, checking scent marks to make sure that it isn't in danger. To further conceal its whereabouts, a lone wolf limits its howling because it could give away its location to enemies [source: Mech and Boitani]. The exception is if a wolf accidentally gets lost from the pack -- it will howl to signal its location [source: Feldhamer et al].

Dispersal doesn't always lead to a life of loneliness. A younger lone wolf may eventually cross into another pack's area to challenge a weak alpha in order to take over. Except during times of abundant prey, the alpha male and female is the only pair allowed to breed. Consequently, hormonal influences surrounding mating season may open an exit door from the pack. A subordinate wolf may catch the scent of a wolf from another pack that's ready to mate, and it may seek out that breeding wolf. In this way, lone wolves can help stimulate and diversify the wolf population. For example, a lone wolf from Finland actually revived the dwindling wolf population in Sweden when it crossed the border and mated. The last Swedish wolf pack had begun inbreeding, and the Finnish wolf mixed up the gene pool, which sparked a resurgence in the pack [source: Hogan].

Even if lone wolves track down mates, the odds are against them. Without the support of the pack, they're more likely to die. But just because a wolf leaves its home doesn't mean it's gone forever. If a lone wolf can't succeed on its own, it may eventually return to its natal pack.

Why are wolves making a comeback in the United States?
Why Is Wombat Scat Shaped Like a Cube?
Do Japanese monkeys season their food?