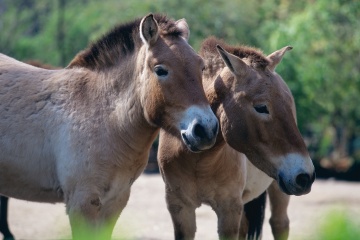 Przewalski's horse is similar to the extinct tarpan and is the only known species of wild horse in the world.
© Siegel, R./Corbis

Mystery surrounds the extinct wild horse called the tarpan. Few descriptions of the horse exists. There's only one known illustration of the animal, and it depicts a juvenile horse, which would have looked different as an adult. The only existing photo depicts what is probably a tarpan-domesticated horse hybrid [source: Maas]. There are a few things known about these horses, which lived in present-day Poland and other parts of Eastern Europe until the last pure tarpan mare died in 1879 after falling into a crevasse [source: Ackerman].

According to a paper published by the American Society of Mammalogists, tarpans were approximately 4 feet tall at the shoulder, stocky and generally smaller than domestic horses. They had pointed muzzles and small eyes, and their coats were mouse-gray or dun with a black stripe down the back. Tarpans also had short manes that stood semi-erect. They survived from prehistoric times until the 1800s, remaining wild, eluding hunters and roaming across North America, Europe and Asia. By the mid-1800s, however, the breed was on a steep decline. They were hunted for food and bred with domestic horses, which diluted the bloodline and further contributed to the dwindling number of pure tarpans.

There are hundreds of breeds of domesticated horses today with just as many physical characteristics, making it difficult to determine how they are different from tarpans. The domestic breed closest to the tarpan is the Heck horse, bred by German Lutz Heck during the 1930s in hopes of bringing back the tarpans and Koniks, Polish horses that look similar to tarpans. Neither is a true wild horse; both are considered feral or untamed descendants of domestic horses. Today, the only wild horse breed left that is similar to the tarpan is Przewalski's horse, which lives in Mongolia and China.

What's the difference between a mammoth and a mastodon?
Stegosaurus: Body Like a Bus, Tiny Little Brain
The Massive Titanoboa Snake Once Ruled the Colombian Rainforest