A Day in the Life of a Woolly Mammoth 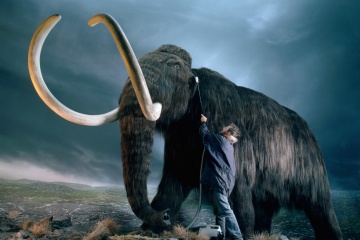 Even though it's a replica (from the Royal British Columbia Museum), you can get a sense of how big the woolly mammoth was compared to humans.
© Jonathan Blair/Royal BC Museum/Corbis

We often picture woolly mammoths lumbering across snow-swept Arctic tundra or snuffling their way through some boggy Russian steppe. In actuality, these mammals roamed landscapes unlike any that exist today. During many parts of the Pleistocene -- an epoch lasting from 1.7 million to 11,500 years ago and ending with the most recent ice age -- a rich and varied mixture of grasses, herbs and sedges spread from Ireland to Siberia, across the Bering land bridge to much of modern Canada. This mammoth steppe was supported by a different climate. As growing glaciers locked up water, sea levels dropped, exposing great swaths of land dominated by dry, clear and breezy blue skies [sources: Lister and Bahn; Mueller; Saey; Willerslev et al.].

Grazing across this landscape in a 20-hour-a-day pursuit of food were vast numbers of Mammuthus primigenius, creatures about the size of modern elephants. These woolly mammoths occurred as lone males, each standing around 9-11 feet (3-4 meters) tall and weighing about 6 tons, or in matriarchal family groups of 2-20 smaller females and calves. They withstood the chill of their northern climes through a number of adaptations, including a 3-4-inch (8-10-centimeter) layer of fat, inch-thick oily skin and a wooly undercoat. The latter was covered with coarser guard hairs ranging from a few inches to up to 3 feet (1 meter) long, with the longest hanging in a musk-ox-like skirt along the mammoth's flanks and belly [sources: BBC; Lister and Bahn; Mueller; National Geographic]. Even their hemoglobin had heat-retaining properties, a trait echoed in many modern, cold-adapted mammals [sources: Campbell; Rummer].

Woolly mammoths shared these lands with other massive mammals, including grazers like woolly rhinoceroses and long-horned bison and predators such as saber-tooth cats and cave hyenas. Given their bulk and massive tusks, healthy adult mammoths could take all comers in a standup fight, especially if gathered in a protective group, so predators likely preyed on sick or injured adults, or picked off the occasional straggling calf [sources: Lister and Bahn; Mueller].

Mammoth calves were mostly born in spring, when fresh growth could support lactating mothers. A 22-month gestation period meant that conception occurred in late summer. Detecting a female in estrus, competing males would demonstrate their fitness via tusk displays, ritualistic sparring or out-and-out fights. Like modern elephants, male woolly mammoths had a musth gland, which secreted a fluid that helped establish reproductive hierarchy during their aggressive, unpredictable musth phase [source: Lister and Bahn].

If, as experts suspect, mammoths resembled today's elephants, then they were likely highly social, educating their calves and perhaps even guarding and burying their dead. They may have periodically come together in great migratory herds and could probably swim to islands a few miles offshore [sources: BBC; Lister and Bahn; Poinar]. In short, they were animals that had evolved to become well adapted to their environment.

A Lifetime of Teething

Beyond fighting, a mammoth's twisted, inward-curling tusks were also handy for stripping and felling trees or shovel-plowing through dirt and snow. Evolved from the mammoth's upper incisors, these tusks would grow throughout the animal's lifetime. The rest of its teeth consisted of foot-long molars with side-to-side grooves that aided in breaking down its tough food. Like today's elephants, a mammoth would go through six sets of teeth in its 60-year life span, typically dying after the last set wore out [sources: Lister and Bahn; National Geographic]. 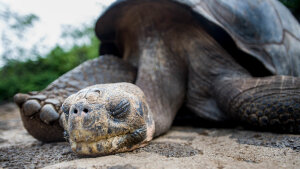 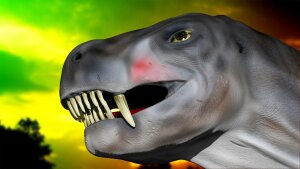 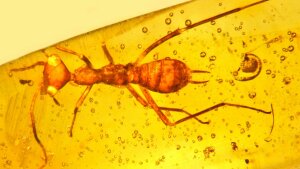