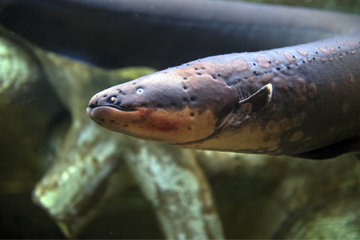 A full-grown electric eel can generate about 600 volts of electricity.
Mark Newman/Getty Images

What started as an ordinary fishing trip for a Brazilian man ended in shocking video footage that went viral. After throwing a line into the Amazon and realizing he'd caught an electric eel, the man reeled up the eel to the riverbank and left to retrieve a knife. When he returned, something else was sizing up the catch of the day. A caiman had sidled up next to the eel. As the fisherman hit record on his smartphone, the big reptile went in for the kill — and died as the eel delivered a violent electric shock.

If you were to encounter a shock from an electric eel, would it kill you? Although there are few documented instances of people dying from an electric eel's shock, it could happen. A single jolt could incapacitate a person long enough to cause him or her to drown, even in shallow water. Multiple shocks could cause a person to stop breathing or go into heart failure.

Whether the shock of an electric eel is fatal also may depend on the size of the eel, which, by the way, isn't actually an eel at all. The electric eel, Electrophorus electricus, is a fish classified in the order Gymnotiformes and is a cousin to the carp and catfish. Electric eels populate the streams, rivers and ponds of South America and can grow as long as 8 feet (2.5 meters) and as heavy as 44 pounds (20 kilograms). Although eels live in the water, these serpentine-shaped creatures surface frequently to breathe air. Even when they don't feel threatened, they emit a constant electric charge of about 10 volts, which acts as a radar to help them find their way in muddy waters. They also use the electric charge to identify fish, amphibians and birds to eat [source: National Geographic].

A full-grown electric eel will generate about 600 volts of electricity in short, intense bursts that last only about 2 milliseconds. This electrical charge comes from thousands of muscle cells that each create a tiny current. A 6-foot eel, for example, has about 6,000 muscle cells working together to generate those 600 volts, which is quintuple the voltage contained within of a standard wall socket in the United States [source: Caputi].

While it's unclear why an eel is able to shock and sometimes electrocute – that is, kill something with the shock – other fish, fowl and amphibians without delivering fatal voltage to its own body, there are a few theories. One such theory is that the eel may feel the shock, but it's built up such a resistance that it doesn't suffer the detrimental effects [source: Pelletier].