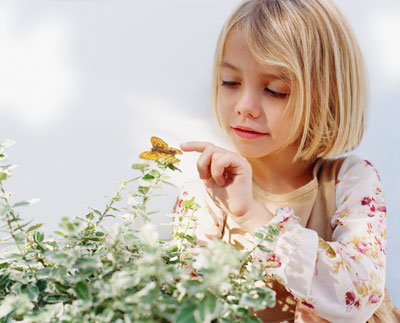 Imagine walking along, minding your own business, when suddenly massive objects twice the size of bowling balls come pelting down on you. It's a scary thought, and it's something butterflies face whenever it rains.

You see, butterflies are relatively tiny creatures, weighing a mere 500 milligrams, so when the sky threatens to unleash raindrops that weigh 70 milligrams or more, their lives may depend on finding good cover [source: Raupp].

You're probably thinking that if raindrops can hurt a butterfly, your well-meaning fingers might, too. And you'd be right. But does that mean the ubiquitous legend that a butterfly will die if you simply touch its wings is true? Not necessarily.

While you don't want to manhandle the beautiful creatures, knowledgeable researchers have been trapping and tagging butterflies for years to track their whereabouts. These scientists and volunteers use nets to corral the flying insects, then gently scrape enough scales from a small area to expose the wing's clear membrane. Next they attach a small tag to the wing and let them go. Among other insights, these studies have revealed much about the migration of monarch butterflies.

Not only do butterflies survive these seemingly traumatic encounters, but they've also been known to fly away from bird attacks and yes, even rainstorms, unscathed. Some have even flown away after having a small portion of their wing torn off [source: Lerner].

Amazing feats of survival notwithstanding, butterflies should be handled with care, if at all. Next, learn what else butterflies use their fragile wings for.