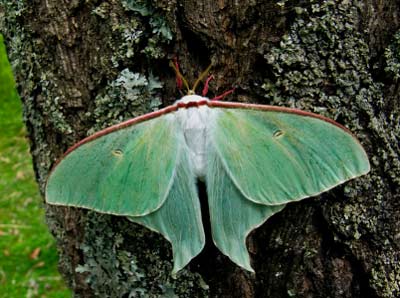 Is this winged creature a butterfly or a moth? See more insect pictures.
©iStockphoto/Valeriy Kirsanov

Suppose a beautiful insect lands on your arm late one afternoon while you're relaxing outside. You can see six legs and two antennae coming from on its narrow body, and it has four wide, sweeping, green wings with delicate red and yellow accents. If you carefully touch a wing, a little bit of powder comes off on your finger. It's obvious to you that this insect either a butterfly or a moth -- but which is it?

Butterflies and moths have a lot in common. They're both part of the scientific order Lepidoptera, meaning scale winged. The name comes from those powdery scales that come off when they're touched. But butterflies and moths have more similarities than just their dusty wings. Both insects start their lives as hungry caterpillars before transforming themselves completely into their flying adult forms. They both eat nectar from flowers, and they supplement their diet with other liquids, like mineral-filled standing water and the juice from rotting fruit.

The difference between butterflies and moths is a lot like the difference between frogs and toads. There are some rules of thumb you can follow to tell them apart, but there are also exceptions to those rules. Next, we'll look at exactly what makes a butterfly different from the moth and what clubs and feathers have to do with it.

A Sense of Scale

Although it's easy to think of moths as tiny, flitting insects that circle light bulbs, not all moths are petite. The world's largest moth is the Atlas moth (Attacus atlas), and it has a wingspan of about a foot (30.5 centimeters). The largest butterfly, Queen Alexandra's birdwing (Ornithoptera alexandrae), is roughly the same size.

The Difference Between Moths and Butterflies

The main differences between butterflies and moths have to do with how they look and how they act.
2008 HowStuffworks

The differences between moths and butterflies fit into two categories: behavior and anatomy. For the most part, moths are nocturnal. They fly and feed at night. Butterflies, on the other hand, are diurnal, or active during the day. So the winged insect you see feeding from a flower in the middle of a spring afternoon is most likely a butterfly. If you watch a large-winged, flitting insect make its way toward a candle at night, it's probably a moth.

Butterflies and moths also pupate, or become adults, differently. Both go through their metamorphosis in a chrysalis, or protective shell. Moths, however, often spin a silk cocoon around their chrysalis, sometimes camouflaging it with leaves or debris.

Most butterflies pupate as a naked chrysalis. Many moths spin silken cocoons to pupate.
2008 HowStuffWorks

The physical differences between moths and butterflies are usually easy to see:

These differences make it simple to decide whether an insect is a butterfly or a moth. For example, you can tell that the insect that assists Gandalf the Grey in "The Lord of the Rings: The Fellowship of the Ring" is a moth. It shows up at night, and it has a wide body, dull colors and feathery antennae.

But not every member of the order Lepidoptera fits neatly into the categories of butterfly and moth. There are butterflies with moth-like qualities and moths with butterfly-like qualities. Skippers have stocky bodies like moths do, but they usually have the clubbed antennae of butterflies, often with a little bend at the end. Like butterflies, skippers fly during the day, but like moths, they tend to have duller coloring. But in one way, skippers aren't like butterflies or moths. Skippers hold their wings at an angle all their own, with the forewings separate from the hindwings.

To learn more about butterflies, moths, and frogs and toads, read the links on the next page.

Why do we study bugs?
How long can scorpions live without food or water?
How Butterflies Work