Caterpillar Metamorphosis: The Magic Within the Chrysalis 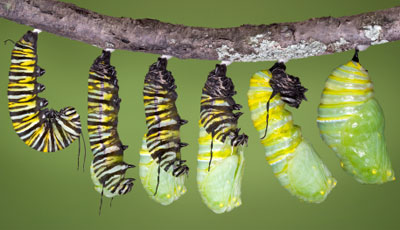 A monarch caterpillar twists to embed its cremaster in a silk pad. Then, it sheds its skin one final time, revealing its chrysalis.
©iStockphoto/Kathy Keifer

A caterpillar spends most of its life crawling on -- and devouring -- its food source. But when it's time to become an adult, most caterpillars start to wander away from what they've been eating. They find a sheltered, safe spot in which to pupate, or transform into an adult. In all caterpillars, this happens inside a protective shell known as a chrysalis, but the specifics differ from species to species.

Let's look at the monarch caterpillar (Danaus plexippus) as an example. After wandering for a while, the caterpillar makes a simple silk pad on the underside of a branch or twig. It uses a hook-covered appendage called a cremaster to attach itself to this pad. It twists around, embedding its cremaster firmly in the silk. Then, it sheds its skin, revealing the chrysalis. The chrysalis hangs upside down from the cremaster until the butterfly is ready to emerge, or eclose.

Other caterpillars use variations on this process when they pupate. Instead of hanging upside down, some make a silk sling from a tree branch to support themselves as they pupate right-side up. Others create a silk hammock to support their chrysalis. The chrysalis starts out soft and skin-like, but gradually hardens to form a protective shell. Often, moth caterpillars spin a cocoon to protect their chrysalis, which starts out soft and skin-like. However, it will gradually harden to form a protective shell. The moth caterpillar may also disguise the cocoon with leaves or other debris.

Caterpillars use different types of support for their chrysalis. Clockwise from the top right: a silk hammock, a silk pad and supportive loop, a silk cocoon on a leaf, and a suspended chrysalis.
2008 HowStuffWorks

It's easy to think of a chrysalis as something a caterpillar makes, like a cocoon, but this isn't really true. The body that the caterpillar reveals when it sheds its skin for the last time is the chrysalis. Along with the ability to occasionally twitch in response to threats, this shell is what protects the caterpillar while it transforms.

The transformation itself is amazing. Think of it as recycling -- if you drop a plastic bottle off in the recycling bin, it can be melted down into an entirely different shape. This is what happens inside the chrysalis. Much of the body breaks itself down into imaginal cells, which are undifferentiated -- like stem cells, they can become any type of cell. The imaginal cells put themselves back together into a new shape. A few parts of the body, such as the legs, are more or less unchanged during this process.

This process of complete transformation is known as holometabolism. The amount of time required to transform completely varies from one species to another, but in general it takes about two weeks. For species that survive the winter by staying in the chrysalis, it can take months.

According to research at Georgetown University, the caterpillars and butterflies that emerge from the chrysalises may remember some of their lives as caterpillars [source: Blackiston]. When caterpillars in the study were conditioned to avoid specific smells, they remembered to keep away from those scents as adults -- but only if the conditioning happened in the last instars of the caterpillars' lives. If you want to learn more what happens once the chrysalis opens, read How Butterflies Work.

Aside from the damage hungry moths can cause to clothing, most people think of the butterflies and moths that emerge from the chrysalis as beautiful and beneficial. But not everyone feels the same way about caterpillars. Read on to learn what to do if hungry caterpillars are destroying the plants in your yard. 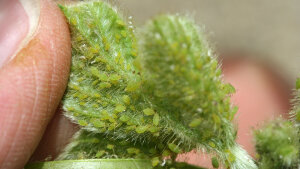