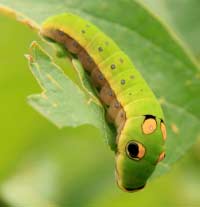 This spicebrush swallowtail (Papilio Troilus) caterpillar has eye spots that make it look like a snake.
©iStockphoto/Mark Ross

A caterpillar's vast food intake makes it an attractive meal, so many species use camouflage to protect themselves from predators. Some swallowtail caterpillars, for example, bear a strong resemblance to bird droppings through their first few instars. When they get too big for this to be convincing, they molt and reveal green bodies with eyespots that make them look like snakes. Other caterpillars use color to blend in to their surroundings or warn predators that they taste bad or cause illness.

But caterpillars use more than just the color and shape of their bodies to avoid predators. Some feed from the undersides of leaves, making it harder for airborne birds to see them. Others make small meals of lots of leaves or eat only partway through the leaf's structure, cutting down on visible damage. In addition to eating their shed skin, a few species make an extra effort to clean up behind themselves. The silver-spotted skipper (Epargyreus clarus), for example, launches its waste away from its leaf shelter to keep predators from tracking it back to its source.

To build its leaf shelter, Epargyreus clarus takes advantage of one of caterpillars' most useful tools -- silk. Many use their silk like a rock climber's rope and harness. If they fall, they can climb back up a fine thread to the leaf. Some species do this deliberately to escape predators.

This might be all that a solitary caterpillar does with its silk during its day-to-day life. It hatches from a single egg and leads an independent existence, using silk only to rescue itself, make a small nest or -- in rare cases -- restrain prey. But for gregarious species, which live in large groups, silk is crucial to survival. Gregarious caterpillars hatch from large clumps of eggs that completely encircle limbs or trunks of trees. As a group, they build large tents, bivouacs or other shelters using their silk and neighboring plant material.

Gregarious caterpillars also lay trails of silk from the tent to the food, and they use silk to build a network of trellises to make it easier to get around the tree where they live. They usually travel in single-file lines, following trails marked with silk and scents. Younger caterpillars rely on the silk left by their older siblings. As a result they grow and develop faster because they don't have to spend energy they could be using to grow on making silk.

All for One (or One for One)

For gregarious caterpillars, living in large groups has benefits and drawbacks. Relying on the work of lots of caterpillars can make it easier to find food, build nests and survive. But living in such close proximity to lots of siblings also increases the risk of diseases spreading through the population. And although it can be easier for a caterpillar to find food by following an established trail, that caterpillar also has to compete with its sibling for food. Whether living in a large group makes it more or less likely for a caterpillar to become a predator's next meal is also a subject of debate.