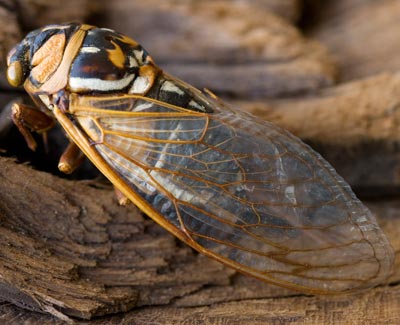 Before Brood II, the most recent periodical cicada to emerge, Brood I, was seen in 2012 in the relatively limited range of West Virginia and Virginia.

Brood II is occurring along the Eastern seaboard from North Carolina to New York in spring 2013. (See Radiolab's Cicada Tracker to check out a map of the sightings.) There will be many, many cicadas per infested acre. So if you are in these areas, you won't miss them.

Even though cicadas may land on you or bump into you, you don't have to worry about getting bitten or stung. Cicadas are harmless. They may cause some slowing of the growth of trees from the amount of sap the cicadas consume, but they won't cause permanent damage. The worst they will do is annoy you with their incessant singing.

The life span of an adult cicada is short, as in a few weeks short. As mysteriously as they arrive, they will disappear. Most will be eaten by birds and other predators. Even the nymphs are not safe below the ground, as they're often preyed upon by beetle larvae and other ground-dwelling parasites.

If you live to be 75 years old, you will only have about four opportunities in your life to hear the song of the Brood II cicadas. If you live in an infested area, you won't be able to miss it. But if you don't, it might be worth your time to go out of your way to hear one of nature's most powerful and elusive performers.