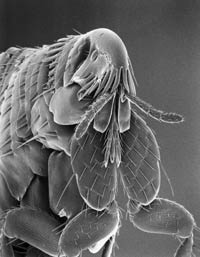 Photo by Dr. Darlyne A. Murawski/

Fleas are tiny, but anyone who has seen one can usually recognize them with ease. They're tiny, flat, wingless insects that have a knack for jumping away before you can catch them. Their bodies are covered with hard plates called sclerites, so if you do catch one, squashing it can be a challenge. Their hard outer shell protects fleas from everything from an animal's teeth to hitting the floor after a long jump.

To the naked eye, a flea's exoskeleton seems completely smooth, but it's really covered in tiny hairs that point away from the flea's head. Their flattened bodies and these backward-pointing hairs make it easy for fleas to crawl through their hosts' fur. But if something tries to dislodge them, the hairs act like tiny Velcro anchors. This is why a fine-toothed comb removes fleas better than a brush does. The teeth of the comb are too close together for fleas to slip through, so it can pull them from the host's hair, regardless of which way fleas' hairs are pointing.

A flea also has spines around its head and mouth -- the number and shape vary according to the flea's species. The mouth itself is adapted for piercing skin and sucking blood. Several mouthparts come together to form a needlelike drinking tube. Here's a rundown:

When a flea bites its host, blood travels from a blood vessel through the epipharynx and into the flea's body. This takes a lot of suction, which comes from pumps in the flea's mouth and gut.

The location of resilin in a flea’s leg (blue).
Photo courtesy Getty Images

A flea's legs are adapted for jumping. As with all insects, a flea has three pairs of legs that attach to its thorax. The back legs are very long, and the flea can bend them at several joints. The process of jumping is a lot like the action of a crossbow. The flea bends its leg, and a pad of elastic protein called resilin stores energy the way a bowstring does. A tendon holds the bent leg in place. When the flea releases this tendon, the leg straightens almost instantly, and the flea accelerates like a bolt from a crossbow. As it lands, the flea uses tiny claws on the ends of its legs to grasp the surface under it. Aside from these adaptations, fleas look a lot like most other insects, and their reproductive cycles are similar as well. Read on to learn more about the life cycle of fleas and why it makes getting rid of an infestation difficult.

Aside from these adaptations, fleas look a lot like most other insects, and their reproductive cycles are similar as well. Read on to learn more about the life cycle of fleas and why it makes getting rid of an infestation difficult.