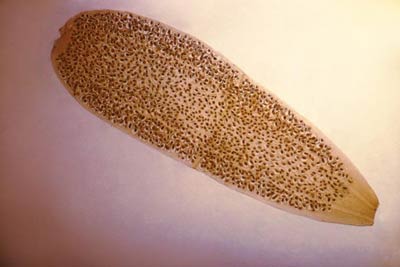 Most people think of fleas as a nuisance -- they bite people and animals, causing itchy, red bumps. This reaction comes from substances in fleas' saliva, and some people react to these substances more strongly than others. Often, fleas draw blood from two or three tightly spaced punctures, causing two or three itchy bumps.

Animals that develop a sensitivity to flea bites can scratch or groom themselves excessively. This can lead to rough skin, baldness and skin infections. Sometimes, these infections can be mistaken for a parasitic infection called mange. Itchy, uncomfortable pets can also be ill-tempered or restless.

In addition to being annoying, fleas can carry diseases. They can even transmit other parasites to people and animals. Flea larvae feed on the eggs of tapeworms. Once swallowed, the tapeworms begin to develop in the gut of the flea. If an animal swallows an infected flea while grooming, the animal becomes infected with tapeworm as well. The tapeworm grows in the intestine of the animal, shedding its egg sacs from the animal's rectum as it sleeps. The sacs land in areas near the animal's bedding -- where flea larvae are likely to live -- and the cycle begins again. People, especially children, can also become infected with tapeworms if they swallow fleas while petting animals or if people come into contact with infected waste and don't wash their hands before eating.

Fleas can also transmit serious diseases. One is bubonic plague. Fleas are vectors -- they transport plague bacteria from rodents, the natural carriers of the disease, to people. A particular species of flea, the Oriental rat flea, is usually the culprit. In addition to preferring to feed on rats, the Oriental rat flea's gut can become blocked by plague bacteria. Then, when it bites its next host, it may regurgitate infected blood into the wound. Symptoms of plague include swollen lymph nodes called buboes, fever, headache and exhaustion. Read How Plague Works to learn more about plague and how fleas spread it.

Fleas can also carry murine typhus, particularly in the southern and southwestern parts of the United States. Murine typhus is caused by the bacteria Rickettsia typhi. The Oriental rat flea and the cat flea can carry these bacteria to people. Usually, the infection comes from the flea's waste rather than the flea's mouth. The fleas defecate while they're eating, and their hosts scratch the infected waste into the bite. People may also break the skin while scratching, and the bacteria can enter the body through the scratch. Murine typhus causes symptoms like fever, headaches and nausea. Both it and bubonic plague are treated with antibiotics.

Since fleas are annoying and can be detrimental for human animal and health, getting rid of them is usually a big priority. Let's take a look at how to keep your home and your pets flea free.

Many people have heard of flea circuses, but fewer have seen one. Flea circuses were a common form of entertainment until the 1800s, and there are only a few in existence today. Flea circuses feature tiny high wires, diving boards and other contraptions on which fleas appear to perform. Some flea circuses do contain real, live fleas, while others are purely illusion. Read more about flea circuses from The Straight Dope and Flea Circus Research.