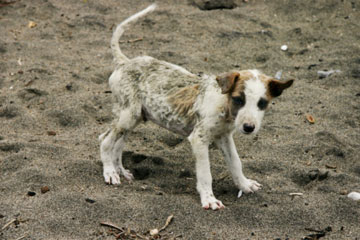 You've probably heard the term "mangy mutt" referring to a poor, broken-down dog with a ratty, patchy coat. That's actually how dogs with mange really look. Mange is a condition caused by an infestation of a specific type of mite that is too tiny to be seen with the naked eye. Its Latin name, Demodex canis, gives rise to the formal names for this condition: demodicosis or demodectic mange.

It's considered normal for healthy dogs to carry around a small population of mange mites. Newborn puppies acquire them from their mothers, and they don't generally cause any problems. The trouble starts when there's a population explosion and the mites get out of control. It can happen in puppies or adult dogs with compromised immune systems, but it usually occurs in dogs under the age of one year. There also appears to be a genetic connection. Some pure breeds can be more susceptible to demodicosis, such as bulldogs, chihuahuas, collies, German shepherds and pugs. Some vets recommend that dogs diagnosed with the more severe form of the condition be neutered so they can't pass it along. To diagnose demodicosis, your vet will gently scrape off some of the superficial layers of the dog's skin and examine them under the microscope to see if mites are present.

Demodex canis isn't the only type of mite that can cause mange. Sarcoptes scabei (var. canis), is the cause of sarcoptic mange -- better known as scabies. This mite is highly contagious and does not occur naturally in dogs. It burrows into the skin's outermost layer and lays its egg. The eggs hatch, the larvae mature and the emergent adult mites start the life cycle all over again. Scabies can be passed from dogs to people through direct contact. It is diagnosed and treated very similarly to demodectic mange, but you'll want to isolate your dog to avoid the spread of the scabies and treat all other pets in the household. In humans, scabies causes red, itchy bumps that look like mosquito bites.

Next, learn about the different types of demodicosis, how it's treated and how to prevent it.

Is a 'dog year' really seven years?
10 Dogs Who Made History
Is a dog really a man's best friend?