by Laurie L. Dove
NEXT PAGE 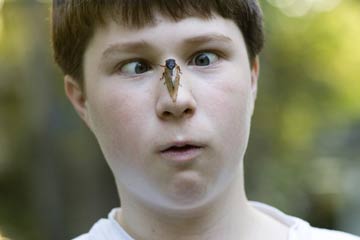 A cicada gets up close and personal with this teenage boy. Fortunately, it's harmless.
© Karen Kasmauski/Corbis

It's the kind of headline that makes entomologists stand a little taller: "Paul McCartney Plagued by Locusts."

During a May 7, 2013, concert for 47,000 fans at an open-air stadium in Brazil, McCartney's stage was swarmed by scores of insects. Many of them stayed for McCartney's three-hour performance, including one plucky bug that perched on his shoulder.

The antennae-sporting admirers probably were locusts -- a term reserved for a specific species of migratory grasshoppers exhibiting swarming behavior -- and members of the Acrididae family [sources: Eby, Vanderpool].

The same can't be said of cicadas, which are commonly and mistakenly called locusts, too. A periodical cicada of the genus Magicicada is an insect measuring 1.5 inches (3.8 centimeters) in length with a red-orange hue and protruding red eyes. In fact, this coloring is an easy way to identify periodical cicadas from other species, including the more common dog-day cicadas. Dog-day cicadas, which appear every year to mark the end of summer, have green-tinged wings [source: Penn State University].

Unlike their dog-day cousins, periodical cicadas make a rare appearance relegated only to the regions east of the United States' Great Plains -- and nowhere else in the world [source: National Geographic].

In 1893, observers began organizing periodical cicadas, also called "17-year cicadas," into broods. These Roman numeral classifications ranging from I through XVII make it easier to track the insects' infrequent arrivals. For example, in 2013, Brood II emerged for the first time since 1996 [source: Penn State University]. The previous time we saw Brood II we were still doing the Macarena.

Each brood includes different species of cicadas that emerge together in a collective bid to find suitable mates. There are 13 broods of 17-year cicadas. Along with 17-year cicadas, there are five broods of 13-year cicadas, which are more prevalent in the southeastern part of the U.S. [source: Penn State University].

Each brood operates on a different schedule, which means you don't have to wait 13 or 17 years to witness the insects' next en masse eruption. For example, in 2014, Brood III is expected to appear in Iowa, Illinois and Missouri. And in 2015, Brood IV will make a comeback in Iowa, Kansas, Missouri, Nebraska, Oklahoma and Texas [source: Cicada Mania]. In fact, there's a brood of cicadas coming out every year in a different part of the eastern U.S. 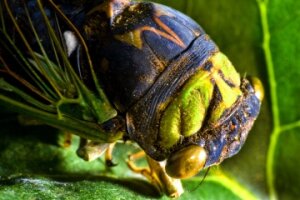 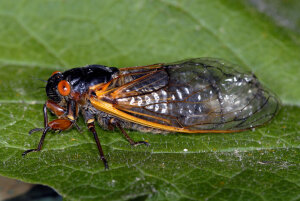