The Long (and Short) of the 17-year Cicada Lifespan 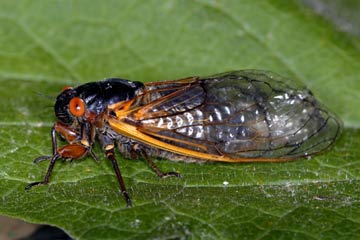 A periodical cicada (unlike your dog-day cicada) is 1.5 inches (3.8 centimeters) in length with a red-orange hue and protruding red eyes.
M. & C. Photography/Getty Images

The sudden appearance of 17-year cicadas is one of nature's most spectacular events, a phenomenon that perhaps led to the fanciful naming of the periodical cicadas' genus classification: Magicicada.

For centuries, periodical cicadas have fascinated scientists and casual observers. "Their incredible ability to merge by the millions ... is without parallel in the animal kingdom," wrote scientists Richard Alexander and Thomas Moore in 1962 [source: Penn State University].

Millions of cicadas may emerge in a single night after spending 17 or 13 years living 2 to 24 inches (5 to 6 centimeters) underground. It's a lengthy childhood that serves as an important distinction that enables them to have the longest life span of any insect in North America.

Seventeen-year cicadas spend the earliest months of their final year burrowing toward the soil's surface. By April, the cicadas have entered a nymph stage and rest slightly below ground level. When the soil temperature rises above 64 degrees Fahrenheit (17.78 degrees Celsius), the cicada nymphs venture out of the soil through half-inch (1.2-centimeter) diameter holes. Their population may number a million or more in a space smaller than 1 acre (0.4 hectares), which helps survival rates. Animals ranging from spiders and birds to dogs and snakes find the lumbering cicadas to be easy prey, but will reach their fill long before they've put a dent in the population [source: University of Michigan Museum of Zoology].

The then flightless young cicadas journey upward at sunset, crawling a foot or more up any nearby vertical surface -- tree trunks, weeds, woody shrubs, homes or outbuildings -- to begin the next phase of life.

Overnight, they will shed their nymphal skins in 60 minutes or less. Much like the fictional Incredible Hulk, the cicadas will split their shell-like clothing to unleash larger bodies. And, as they emerge through the tops of their shells, the cicadas will unfurl their wings for the first time.

Now the cicada is an adult -- soft, ashen and vulnerable -- waiting for its exoskeleton to harden and darken in color. It will leave its crunchy larval casing behind. Still clinging to the cicada's first aboveground resting place, the casing will be an empty and forgotten outline of the creature it once held [source: Penn State University].