by Wendy Bowman May 6, 2020
The giant anteater (Myrmecophaga tridactyla), contrary to popular belief, does not have the longest tongue of any mammal on Earth. That honor belongs to the mighty blue whale. Fernando Flores/Flickr (CC BY-SA 2.0)

When you think of an anteater, a quirky-looking mammal with specialized attributes and adaptations for eating ants and termites probably springs to mind. But there are many things you might not know about this toothless, insect-eating mammal found in tropical savannas and forests from Southern Mexico to Paraguay and Northern Argentina. For instance, are you aware that there are four recognized species of anteaters that all vary in size and shape? These include the silky anteater, northern and southern tamandua, and the most well-known of the species, the giant anteater (also known as the "ant bear").

"Overall, the giant anteater's body size is comparable to that of a Labrador retriever," says Rick Schwartz, a global ambassador for California's San Diego Zoo, in an email interview. "The hairs on the body and tail are dense and coarse, with the tail being almost as long as the body, and the hairs are long and flow downward. The head is very long and narrow, and the face slopes down to a very long snout that ends with a nose and small mouth on the end. Coloration varies from region to region, but in general, anteaters are grayish brown with black markings."

Some other interesting tidbits about giant anteaters, according to Schwartz: Their sense of smell is about 40 times more sensitive than a human's sense of smell, which is good for sniffing out insects; and at 91 degrees F (32 degrees C), they have one of the lower body temperatures found in mammals, which probably has to do with their low-calorie diet of insects. And although they're not listed as endangered, he adds, it's estimated that there are only about 5,000 giant anteaters living in native habitats.

1. Anteaters Are of the Same Order, Xenarthra, as Armadillos

"This order also includes sloths and armadillos," says Melissa Ciccariello, zookeeper in charge of anteaters for Roger Williams Park Zoo in Providence, Rhode Island, via an email interview. "Anteaters and sloths began to diverge from armadillos approximately 66 million years ago."

2. They Don't Have the Longest Tongue of Any Animal

While the giant anteater's tongue is about 20 to 24 inches (51 to 61 centimeters) long, the blue whale has the largest tongue of any animal alive today, according to Schwartz. "Even in the category of tongue length in relation to body size, the anteater still doesn't win," he explains. "That is a title that belongs to the nectar bat and the chameleon." Adds Ciccariello: "Giant anteaters' tongues look like a long black worm, and they often stretch them when they wake up."

3. Anteaters Slip Their "Spaghetti-like" Tongue Into Ant Hills and Termite Mounds to Eat

"They use their claws to break open ant and termite mounds," says Ciccariello. "They stick their tongues into the tunnels (they can flick their tongues up to 150 times per minute), and the ants or termites stick to their tongues, which are covered in super-sticky saliva." Once the tongue delivers the insects into the mouth, adds Schwartz, the anteater crushes the insects with the roof of its mouth and swallows them. As an aside: They don't fully destroy an ant or termite mound. "That way," says Ciccariello. "they can feed on it again when they return."

"While anteaters will eat primarily ants and termites, it's not uncommon for them to enjoy fallen fruit," says Schwartz. "They eat super-ripe, soft fruit like mangos and avocados that have fallen to the ground. They can use their claws to break into the fruit, and then use their lips to pull the fruit into their mouths," adds Ciccariello.

5. They Sleep in a Ball and Cover Themselves with Their Tails

"This keeps them camouflaged," says Ciccariello, "and they can cool themselves off by using their tail as a fan."

6. Their Front Claws Are Large and Come to a Very Sharp Point

"Therefore, the anteater walks with the front feet slightly curled, causing it to walk more on its knuckles than on its toes," says Schwartz. "This step, or way of walking, protects the claws from wearing down. This is important, because the claws are one of the only tools the anteater has to break open termite mounds, deadwood and anthills to access the insects it needs to eat to survive."

A 3-month-old baby Southern Tamandua Konbu, a genus of anteater, feels safe and comfortable holding on to its mother's back at Sunshine International Aquarium in Tokyo, Japan.
Junko Kimura/Getty Images

7. They Can Be Dangerous to Humans if They Feel Threatened

"It's always best to give them their space should you ever come across one," says Schwartz. "They can't bite you, because their mouth is only large enough to allow the tongue to go in and out, but their big, sharp claws can be used as defensive weapons." Adds Ciccariell: "They can rear up on their back legs and swipe. They have very strong forearm muscles, and with the claws being as long as they are, they can eviscerate a human."

8. In Some Parts of the World, It's Legal to Have One as a Pet

"However, they do require a specialized food source," says Schwartz. "You would need to have a veterinarian on hand who knows and understands the unique medical requirements of this species."

Not to mention, they are very destructive. "Anteaters love to dig and tear things apart. They would tear through walls in no time!" adds Ciccariello.

Now That's Interesting
"They take baths," says Ciccariello. "Most days they lay in water, and they will clean their tails and skin by scratching themselves. Their super-sticky saliva means they can't clean their bodies by licking themselves." 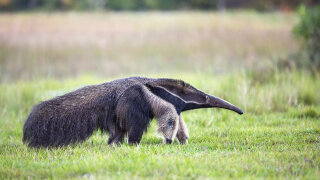 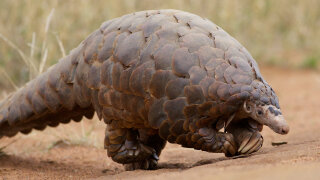 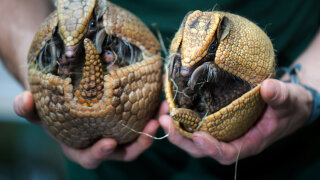