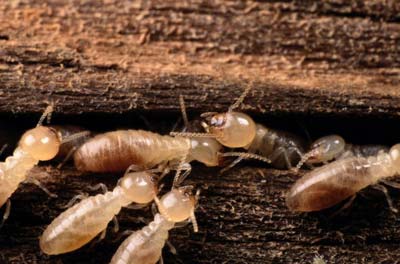 These termites will make for a tasty meal once an anteater or aardvark discovers them. See more pictures of insects.

If you were invited to a potluck dinner hosted by a group of aardvarks, anteaters and armadillos, you could just walk outside, find your nearest anthill and scoop a pile of it into a serving dish. Although preventing the ants from crawling all over the dinner table might be a challenge, your culinary contribution would be readily appreciated. That's because these animals are part of a group of mammals that have a particular palate for ants, as the anteater's name implies. In fact, there are only 22 species of animals described as myrmecophagous, or termite- and ant-eating [source: Redford].

Out of that group of 22, anteaters and aardvarks are often lumped together as assumed relatives. People may even refer to aardvarks as "anteaters." Granted, they share similar facial features like elongated snouts and tongues. The anteater's tongue can extend up to 24 inches (60 centimeters) to probe inside anthills and extract ants by the hundreds. Anteaters can flick their tongues in and out of the hill as fast as 150 times per minute [source: Cohn]. At that rate, they may consume 30,000 ants and termites in one day [source: San Diego Zoo].

­The aardvark's tongue is about half as long since its body is generally smaller than an anteater's, but it still gets the job done. Both animals' hollow snouts produce a suctioning effect to help suck angry termites and ants quickly out of the mounds and into their mouths. Enlarged salivary glands produce thick, sticky saliva that traps the insects on the tongues.

Anteaters and aardvarks also share sensory similarities. It doesn't take keen eyesight to spot immobile food targets like anthills and termite mounds. Accordingly, both species have lackluster vision but powerful olfactory senses, which allow them to sniff out their subterranean meals. Once they locate their food source, aardvarks and anteaters can use their strong front claws to rip into the mound and start lapping up the tasty ants or termites. By striking deeply and quickly into the insect fortresses, anteaters' and aardvarks' sneak attacks help them avoid the wrath of soldier ants that deliver stinging bites.

But just because two people enjoy eating the same foods with the same utensils doesn't mean they're cut from the same genetic cloth. Rather, they use comparable mechanisms to feed themselves. The same goes with the anteater and aardvark. 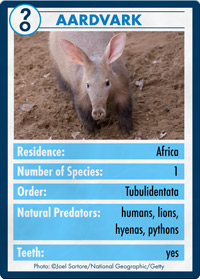 Does a deer have exactly enough brains to tan its own hide?
The Smiley Quokka Is an Australian Super Survivor
What a Tangled Web a Few Squirrels' Tails Can Weave