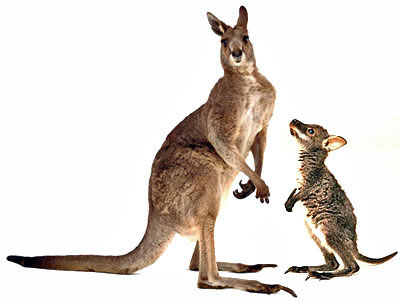 If you're like most people, when you think of kangaroos and wallabies, you think of Australia -- pouched animals with prominent hind legs, bouncing around the countryside like kids on pogo sticks. Or perhaps you flash to your favorite marsupial characters -- Rocko from "Rocko's Modern Life" or Kanga, friend to Christopher Robin and Winnie the Pooh. Or do you think of Captain Kangaroo?

Regardless of your associations, you've probably wondered what distinguishes one animal from the other. After all, they look so much alike. They're both marsupials, meaning mothers carry their young around in built-in pouches. And scientists have even grouped them into the same order, family and subfamily.

Don't let the name fool you: Captain Kangaroo is in fact a human being.
Lisa Larson/Time & Life Pictures/ Getty Images

So what's the difference? Is Rocko a wallaby or a kangaroo?

The most obvious difference between the wallaby and the kangaroo is size. As a rule, the kangaroo is generally much larger than the wallaby. The kangaroo has more height between its ankles and knees, which makes its legs seem out of proportion to its body. The kangaroo's legs are built for speed on open terrain. The wallaby's more compact legs are built for agility in forested areas. Although there are many different species of both wallabies and kangaroos that span a wide range of sizes, wallabies only tend to weigh between four pounds and 53 pounds (2 kg to 24 kg) and grow a mere 12 inches to 24 inches (30 cm to 104 cm) tall, not including their tails [source: "Wallaby"]. Kangaroos, on the other hand, can grow to heights of 8 feet (2.1 meters) and weigh as much as 200 pounds (91 kg) [source: Microsoft Encarta].

Another simple way to tell a wallaby and a kangaroo apart is by their coloring. A wallaby's coat is usually brighter with two to three different colors. For example, the unfortunately-named "red-necked" wallaby's grayish body is distinguished by reddish markings around its shoulders. The kangaroo's coat is usually less splashy and more uniform, with muted colors like brown or gray.

For a more scientific way to tell the two animals apart, you'll have to get these guys to open their mouths and say "Aaaah." On the next page, learn how a quick look at the kangaroo's and wallaby's teeth could help you identify them.

If the guys on "CSI" and "Law and Order" can use dental records to identify human individuals, why not extend the same logic to animals? That's exactly what scientists have done. To be absolutely sure which animal you're dealing with, you have to compare their molars. Since the two species eat their meals in different habitats, their teeth have evolved over the years to suit the specific vegetable matter they consume.

The wallaby lives in bushy forest areas where it dines on mostly leaves. Because the wallaby has to crush and grind up leaves in its mouth, it needs flat teeth. Unlike the kangaroo, it doesn't do much cutting, so its crowns are less pronounced. However, the wallaby does retain a single cutting tooth on the top of its mouth for any occasional cutting needs. It also keeps its premolars; the kangaroo sheds its premolars.

The kangaroo, which lives in more open treeless areas, chomps on mostly grasses. Because the kangaroo has to slice up stalks of grass in its mouth, it needs teeth that can accomplish the task. The kangaroo's teeth are curved with cross-cutting ridges for cutting and shearing grass. Its molars have higher crowns than wallaby teeth.

Are you still wondering whether Rocko is a kangaroo or a wallaby? Next time you're watching "Rocko's Modern Life," peer inside his mouth and check out his molars. If his creators know their stuff, you should see flat teeth and a sharp cutting tooth; Rocko is a wallaby. You'll also notice he's noticeably smaller than his buddies on the show, another telltale sign that he's a member of the wallaby species.

To learn more about kangaroos and wallabies and some other intriguing animals, investigate the links on the following page.

The Macropodidae family, to which wallabies and kangaroos belong, contains more than 54 species [source: Myers]. The seven foot (2.1 meter) tall Eastern gray kangaroo can travel at speeds of up to 35 mph (56 kph) and cover 25 feet (8 meters) of grassland in a single jump [source: "Eastern Gray Kangaroo"]. The Brush-tailed rock wallaby, which only grows about 30 inches (76.2 centimeters) tall, shelters in caves [source: Fountain]. With this kind of diversity, there are bound to be some exceptions to the differences outlined in this article.