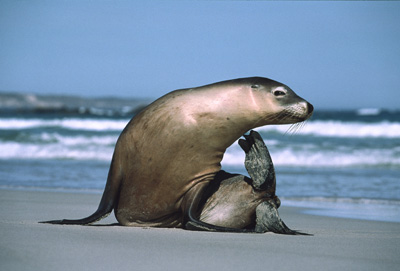 Seals and sea lions are right up there with otters and dolphins as some of the marine darlings that draw crowds of admiring fans to aquariums and beaches. But upon closer inspection, you may wonder which animal you're actually pointing and grinning at: a seal or a sea lion.

Seals are closely related to sea lions and another semiaquatic mammal -- the walrus -- but there are some distinct differences. Walruses are easy to point out, but seals and sea lions can get a little confusing, especially because of the terminology used for the two. Sea lions are classified with fur seals, and the remaining seals with ears are known as true seals. We'll discuss fur seals and true seals in much more detail on the next page.

Taxonomic discussions tend to be a bit muddled as scientists strive to classify all the different species on the planet. Both types of seals, sea lions and walruses are all considered to be in the suborder Pinnipedia, which is usually translated as "fin-footed" or "feather-footed." Pinnipeds (within the order Carnivora) consist of three families. The breakdown of these families looks something like this:

Before we look at what sets these animals apart, let's examine some features all pinnipeds share. For instance, they all have short fur (although in varying amounts), growing in different shades and patterns. Pinnipeds sport fine-tuned whiskers called vibrissae which, like with cats and mice, work as tactile sensors. These mammals also possess four flippers and great hearing. All three branches tend to be social butterflies, although at times individuals may crave some alone time.

Baby seals or sea lions are called pups, while baby walruses are known as calves. Pinnipeds can live in the womb for anywhere from 8 to 16 months, depending on how long the fertilized egg lies dormant.

As you probably guessed from the name of their order, pinnipeds are carnivores and eat a variety crustaceans and clams. Pinnipeds also vary greatly between family, genus and species in the amount of time they spend on land versus time in the water. They're believed to have evolved from animals similar to bears or weasels. As these creatures began spending long spans of time in the water, they eventually adapted to their marine environment and became semiaquatic.

Ready to discover what visual cues you can use to determine if the animal you're looking at is a sea lion or a seal? Find out how to tell these slick customers apart on the next page. 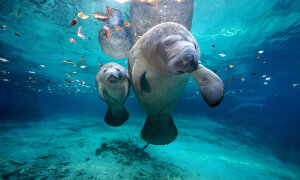 Can manatees see under water?