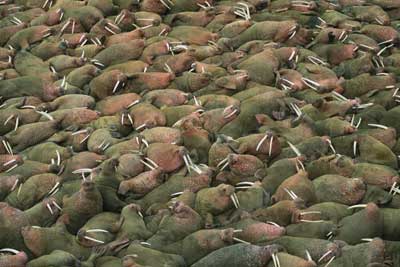 Each summer, nine million pounds of walrus flesh packs the beaches of Round Island, off the southwest coast of Alaska in the Bering Sea. Scientists aren't exactly sure why, but for a few months each summer, about 12,000 male Pacific walruses congregate on the two mile (3.2 km) long island. From the base of the cliffs to the bubbly surf, all you can see is walrus.

Known as rather gregarious creatures, the walruses may simply enjoy one another's company -- although they do occasionally jab a neighbor with their long tusks to assert dominance. Or, perhaps they are simply trying to stay warm. After all, temperatures can slip below zero degrees Fahrenheit (-32 degrees Celsius). Or maybe they're just chatting about the ladies; the female walruses are far away, in route back from their yearly migration north -- with calves in tow.

Whatever the reason for this months-long male bonding, it presents an ideal setting for scientists to study the mammal, whose name in Danish means "sea horse" or "sea cow." In the years since research began, biologists have learned much about this hardy creature of the arctic. For example, in just the last decade, scientists discovered that the walrus doesn't use its tusks to dig for food along the ocean bottom, as previously thought. It actually blows a stream of water at the sea floor to stir up the prey.

On the following pages, you'll learn even more about this tusked animal -- from how the walrus removes clams from shells (think vacuum cleaner) to how deep it can dive (hint: almost the full length of a football field) [source: Lanken].

A Good Friend to Have

Don't be fooled by their toothy appearance -- walruses are actually very sensitive creatures. Young male walruses have been observed keeping watch over injured walruses and pushing dead or dying walruses off of ice floes so nearby hunters can't get to them. Female walruses may also carry their dead young away from hunters. Despite the presence of men nearby, one determined mother hacked away at a huge chunk of ice with her tusks until it broke away to free her calf from a crevasse [source: Burns].