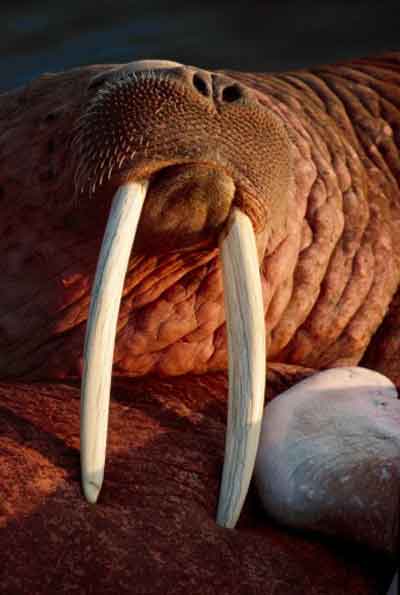 A walrus's tusks may reach two feet long and weigh up to 12 pounds.
Jeff Foott/Getty Images

Walruses are the second largest animal belonging to the order Pinnepedia, which also includes seals and sea lions. Of these animals, only the elephant seal can grow larger than the walrus. Walruses are also the only member of the order to possess tusks -- two especially long upper canines that can reach lengths of 3 feet (0.91 meters) and weigh 12 pounds (5.4 kg). In fact, the walrus's family name, Obodenidae, means tooth-walker in Greek, referring to the way walruses pull themselves up out of the water by hooking their long tusks into the ice.

You might assume walruses use their tusks as weapons, but primarily they use their tusks as tools and for establishing dominance. When males do get feisty, the especially thick skin around their neck and shoulders protects them from sharp jabs. In addition to using their tusks to haul themselves out of the water, walruses also use them when underwater to break breathing holes in the ice. And they may even hook the tusks over the ice like clothes hangers in order to take a break from swimming. Both the males and females have tusks, but the males' are longer, straighter and stronger, and may continue to grow for up to 15 years [source: Burns].

Walruses are generally a darkish brown color and have large, round bodies. They appear relatively clumsy on land but move easily through the water, where they spend two-thirds of their lives. Walruses have four flippers with rough bottoms to help provide traction on the slippery snow and ice. To move on land, they turn their two front flippers at 90-degree angles to their body and flap their two rear flippers directly underneath their pelvis. In the water, they can reach speeds up to 21.7 mph (35 kph). A walrus's front flippers are used for steering and its two hind flippers alternate strokes to propel the walrus through the water at an average of 4.3 mph (7 kph) [source: Burns].

The two walrus subspecies -- the Atlantic walrus and the Pacific walrus -- are geographically and reproductively isolated, meaning they do not interbreed or interact in any way. The two subspecies are similar except for size.

Walruses are located throughout the arctic region. The Pacific walrus is found in the Bering, Chuckchi and Laptev seas of the Pacific Ocean. The Atlantic is found in the Atlantic Ocean primarily along the northeast coasts of Canada and in Greenland. Roughly 250,000 walruses exist today; 200,000 of these are Pacific stock [source: Burns]. As you might expect, more is known about the more prevalent Pacific walrus. This is partly due to funding issues, but also because of sheer numbers.

Map shows the distribution of the Pacific, the Atlantic and the Laptev walrus subspecies. See also the migratory path of the Pacific walrus.
Marcus Williams, HowStuffWorks

On the next page, you'll learn how a walrus's mustache can supplement its eyes and why its feeding habits might make it a good contender in a competitive eating contest.

Some scientists suggest a third walrus subspecies exists, based on specimens from the Laptev Sea, near Siberia. The Laptev walrus has a skull similar to the Pacific walrus and a body size in between that of the Atlantic and Pacific. But scientists dispute whether this walrus merits the distinction of a subspecies, so it has not been officially recognized.