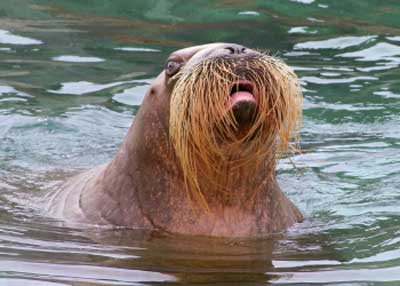 prey along the ocean floor.
Istock

Walruses do an excellent job of locating and consuming prey, but it's not because of good eyesight. The walrus's two eyes, on the front (not the sides) of its round head, don't provide especially good vision. Instead, other senses do the bulk of the work. A walrus's ears -- two small openings with protective flaps -- can detect noises up to a mile (1.6 km) away. Walrus noses are sensitive enough to detect the approach of predators and to identify young. In addition, a walrus possesses anywhere from 400 to 700 whiskers in 13 to 15 rows around the nose. The whiskers, also known as vibrissae, are attached to muscles and are supplied with blood and nerves, which makes them highly sensitive.

Walruses use these sensitive whiskers to locate prey. They hunt with their noses to the sea floor, squirting water out of their nostrils to stir up burrowing prey. Walruses generally forage in groups at depths between 33 feet and 164 feet (10 m-50 m) and seem to prefer clams as a food source. Walruses are not picky, though. They'll eat pretty much any bottom dweller including worms, snails, crabs and sea cucumbers. When a walrus does locate some shelled prey, it uses its mouth as a vacuum to suck the animal right out of the shell. The suction is so powerful that walruses in captivity have sucked holes in plywood and stripped paint from walls [source: Vlessides]. Walruses do not chew their food, but simply swallow it whole. A grown walrus can consume 3,000-6,000 clams in one sitting. In fact, walruses consume approximately 4.2 percent to 6.2 percent of their body weight each day [source: Burns].

So how do walruses eat underwater for so long without air? And how do they tolerate frigid water temperatures? Keep reading to learn how walruses have adapted to endure the harsh climate.

Too Hot to Handle

Research shows walruses may be negatively impacted by global warming. As the Earth's average temperature increases, more and more ice in the polar region recedes. This could be devastating to the walruses because they depend on the ice shelves as a resting ground between dives. The shallow waters where walruses like to feed now have little or no ice for mothers and babies to rest on when feeding. As a result, mothers may have to travel farther to reach feeding and resting grounds. This means they may become separated from their young. Areas that do have ice shelves are deeper and the walruses are not accustomed to diving that deep for food. Only time will tell whether the walruses can adapt to the longer commute and deeper dives required because of the ice's retreat [source: Butler].