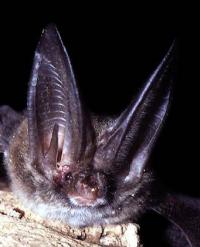 In the last section, we saw that the unique wing structure of bats gives them a great deal of flight maneuverability. This is crucial to a bat's survival, as their main prey are small, quick-moving insects. The task of hunting is made even more difficult for bats because they are only active at night, dusk and dawn. Bats have adapted to this lifestyle to avoid the fierce flying predators that are active in the daytime, and also to take advantage of the abundance of insect species that are active at night.

To help them find their prey in the dark, most bat species have developed a remarkable navigation system called echolocation. To understand how echolocation works, imagine an "echo canyon." If you stand on the edge of a canyon and shout "hello," you'll hear your own voice coming back to you an instant later.

The process that makes this happen is pretty simple. You produced sound by rushing air from your lungs past your vibrating vocal chords. These vibrations caused fluctuations in the rushing air, which formed a sound wave. A sound wave is just a moving pattern of fluctuations in air pressure. The changing air pressure pushes surrounding air particles out and then pulls them back in. These particles then push and pull the particles next to them, passing on the energy and pattern of the sound. In this way, sound can travel long distances through the air. The pitch and tone of the sound are determined by the frequency of the air-pressure fluctuations, which is determined by the way you move your vocal chords.

When you shout, you produce a sound wave that travels across the canyon. The rock face on the opposite side of the canyon deflects the air-pressure energy of the sound wave so that it begins moving in the opposite direction, heading back to you. In an area where atmospheric air pressure and air composition is constant, sound waves always move at the same speed. If you knew the speed of sound in the area, and you had a very precise stopwatch, you could use sound to determine the distance across the canyon.

Let's say you're at sea level, and the air is relatively dry. In these conditions, sound waves travel at 741.1 miles per hour (1,193 kph), or 0.2 miles per second (0.32 kps). To figure out the distance across the canyon, you would clock the time between when you first started shouting and when you first heard your echo. Let's say this took exactly 3 seconds. If the sound wave were moving at 0.2 miles per second for 3 seconds, it would have travelled 0.6 miles (0.97 km). This is the distance of the total trip, across the canyon and back. Dividing the total by two, you get 0.3 miles (0.48 km) as the one-way distance.

This is the basic principle of echolocation. Bats make sounds the same way we do, by moving air past their vibrating vocal chords. Some bats emit the sounds from their mouth, which they hold open as they fly. Others emit sound through their nose. It's not fully understood how the bat's sound production works, but scientists believe that the strange nose structure found in some bats serves to focus the noise for more accurate pin-pointing of insects and other prey.

In the case of most bats, the echolocation sound has an extremely high pitch -- so high that it is beyond the human hearing range. But the sound behaves the same way as the sound of your shout. It travels through the air as a wave, and the energy of this wave bounces off any object it comes across. A bat emits a sound wave and listens carefully to the echoes that return to it. The bat's brain processes the returning information the same way we processed our shouting sound using a stopwatch and calculator. By determining how long it takes a noise to return, the bat's brain figures out how far away an object is.

The bat can also determine where the object is, how big it is and in what direction it is moving. The bat can tell if an insect is to the right or left by comparing when the sound reaches its right ear to when the sound reaches its left ear: If the sound of the echo reaches the right ear before it reaches the left ear, the insect is obviously to the right. The bat's ears have a complex collection of folds that help it determine an insect's vertical position. Echoes coming from below will hit the folds of the outer ear at a different point than sounds coming from above, and so will sound different when they reach the bat's inner ear.

A bat can tell how big an insect is based on the intensity of the echo. A smaller object will reflect less of the sound wave, and so will produce a less intense echo. The­ bat can sense in which direction the insect is moving based on the pitch of the echo. If the insect is moving away from the bat, the returning echo will have a lower pitch than the original sound, while the echo from an insect moving toward the bat will have a higher pitch. This difference is due to the Doppler effect, which you can read about in How Radar Works.

A bat processes all of this information unconsciously, the same way we process the visual and aural information we gather with our eyes and ears. A bat forms an echolocation image in its head that is something like the image you form in your head based on visual information. Bats also process visual information -- contrary to popular belief, most bats have fairly acute vision. They use echolocation in conjunction with vision, not instead of it.

In the next section, we'll look at the other part of a bat's life, the things they do during the daytime. As we'll see, a bat's daytime life couldn't be more different from its night life, but it is just as phenomenal.