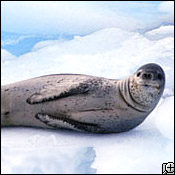 This seal gets its common name from the numerous dark spots on its coat.

The name leopard seal, though, is sometimes also applied to other spotted seals, such as the Weddell's seal.

A solitary seal, it has huge canine teeth and massive jaws.

Generally it feeds on krill, which it strains from the water with its specialized teeth.

It is the only seal that preys on warm-blooded animals; it catches penguins and even other seals, which it pursues underwater.

A fast swimmer, it also preys on fish and squid.