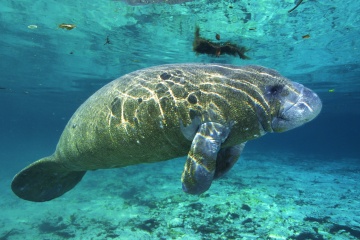 Manatees are beautiful, graceful creatures, but can they ever toe-to-toe with the mystique of mermaids?
Comstock Images/Thinkstock

While some kinder folks can argue that seeing the graceful manatee glide through the water -- playful and peaceful -- could easily have inspired the glowing tales of mermaids frolicking, I think a fair amount of us could be forgiven for totally not believing the myth. Have you seen a manatee? They resemble the kind of lumpy, overfed-looking creature that would result from the illicit union of a dolphin and a monk seal. You have to be a particularly sweet kind of person to look at one and think, "Oh! It's Ariel!"

And so we begin our quest: Did anyone in their right minds actually think that mermaids were spun into existence when lonely sailors saw manatees and mistook them for beautiful sirens of the sea? It depends on whether you think Christopher Columbus was in his right mind. Yup, it was old Chris C. that first claimed he spotted a mermaid that was, in fact, a lumbering manatee. In 1493, he was on his way to the New World (not that he knew it yet) when he saw a "female form" coming out of the water. To be fair, he did acknowledge they were a whole lot uglier than the stated lore [source: Smith].

But here's the thing: Columbus was ready to see a mermaid. Not because he was insane (at least on this front), but because the ocean was so very mysterious and unexplored in his time. (And let's not pretend we understand it completely now.) In the 15th century, tales of sea dragons, monsters and, of course, mermaids were popular and accepted. So spotting a manatee from a distance could fulfill the requirements for the mermaid you're expecting. It has a fish-like tail, with a head and back that doesn't resemble your usual dolphin, shark or whale.

Of course, it's important to note the timeline. Even the ancient Babylonians had a half-fish, half-human god by the fourth century BC [source: Fairclough]. The idea of mermaid-like creatures might not have totally originated with manatees; it could just be that manatees -- when spotted -- fit the bill.

The manatee might not have fooled some sharper-eyed sailors, and it probably wasn't the reason that mermaid legends (in general) were born. But that doesn't mean that some didn't mistake the creatures for lovely ladies. (Or, erm, just ladies.) Let's not give the manatee such short shrift -- its order is even named Sirenia, which harkens back to Homer's temptresses that lured sailors into the sea.

What's Up With This Brain-shaped Blob Found in a Canadian Lagoon?
Secret Alphabet of Squid Skin Due to Brains Totally Unlike Our Own
Here's What Happens When You Swallow a Leech