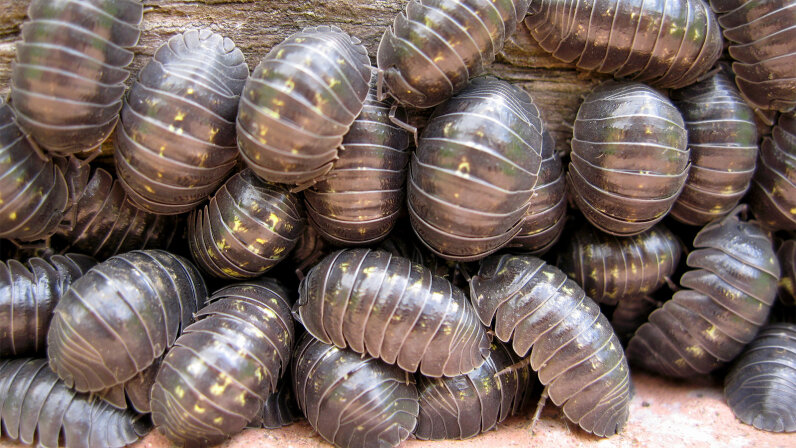 Roly-poly bugs (Armadillidium vulgare) often hang out in groups and are able to form their bodies into a ball shape, in a process known as conglobation. Woodlouse/Flickr (CC BY-SA 2.0)

Woodlice. Potato bugs. Pill bugs. Roly polies. They look like a shrimp crossed with an armadillo and they seem to have a different name everywhere they're found. In fact, the scientific name for these little armor-plated, armadillo-like creatures is Armadillidium vulgare.

With 12 known species of roly-poly bugs found in the United State alone, these tiny gray crustaceans (yup, they aren't insects, but crustaceans, just like crab and lobster) inhabit the northern and central parts of the country, as well as many dark, damp places across the world. They're the only crustaceans that have adapted to living completely on land, according to the University of Kentucky Entomology.

So, while you may not love the thought of these little critters rolling over your feet, they don't sting, bite or carry diseases, and there is a very real benefit to having them in your backyard garden.

It all starts with the microbes within the confines of the roly-poly's innards. These microscopic gut creatures actually help roly-poly bugs break down dead organic matter. Studies have shown the benefits of the roly-poly's detritivorous diet (meaning they absorb nutrients from decomposing plants, animals and poop) on soil. The roly-poly's particular eating habits positively affected the ecosystem by increasing the mineral content of the soil, essentially turning organic matter into healthy soil.

How does it work? A detritivorous diet increases the speed of decomposition in dead plants, animals or poop, increasing the bioavailability of nutrients in the soil. This gives plants a higher chance of survival by providing better quality soil. It's not just what roly-poly bugs add to the soil, but what they take out too.

Turns out these guys love heavy metals. After studying the composition of their insides, scientists found that roly-poly bugs ingest a lot of heavy metal contamination from our soil. That's why they can live and thrive in areas contaminated with toxins like lead, cadmium and arsenic. Once they've ingested these toxins, they become crystallized within their guts, meaning a construction site contaminated with heavy metals could effectively be cleaned by a bunch of hungry roly-poly bugs.

So, are you noticing a roly-poly party taking place in your backyard? Don't worry. Because they're crustaceans, roly-poly bugs need moisture to breathe and typically get if from the tender sprouts of young fruits and vegetables, though they rarely do so to the extent that they cause damage. And, in the meantime, these little guys are doing a lot of the heavy lifting involved in creating the healthy soil that will help your garden thrive.

Just like their distant cousins, lobster and shrimp, roly-poly bugs actually breathe through a pair of gills.