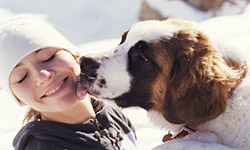 Saint Bernards are known for their affectionate and gentle natures.
Vicky Kasala/Getty Images

So, you want a huge dog to be a part of your family? We're not talking just a big dog here -- say, a slender Golden Retriever that only comes to your knees. We mean really giant dogs, the tallest or most massive around.

Before you add a giant dog to your family, consider that a big dog needs a big space. He's not going to be happy confined to an apartment or small pen most of the day. You'll probably need a large yard with a secure fence and someone willing to walk the dog daily to keep him happy.

Be careful choosing a large breed as a family dog, especially if your "family" includes children. Although big dogs are usually quiet, gentle and slow-moving enough for families with children, avoid large dogs that have strong herding or protective, watchdog instincts. Even though such dogs may be great companions for children they're raised with, they may try to "herd" or be aggressive toward a child's playmates. They also may be aggressive toward other dogs. That said, even the most even-tempered and gentle breeds can knock a child down while playing, so try not to leave large dogs and small children together alone.

One last, unfortunate consideration: The largest dogs tend to have the shortest life expectancies -- many of them only about eight years.

If you really want a gentle giant in your family, there are good choices. Keep reading to meet some.

A true gentle giant, the Irish wolfhound is the tallest of dog breeds. It's also is one of the sweetest.

Irish wolfhounds are sight hounds -- dogs bred to use keen eyesight and swiftness to hunt. Irish Wolfhounds are an ancient breed that hunted wolves in Ireland nearly 2,000 years ago. Ancient Romans wrote about them and may have brought them to Ireland [source: The Complete Dog Book].

These big puppies need to play and bond with the family. Irish Wolfhounds are usually gentle, quiet, calm, even-tempered and affectionate. A large, fenced yard comes in handy. Adult Wolfhounds may get lazy. It's a good idea to take them for frequent long walks to keep them healthy. Excursions where they can run free are even better -- Irish Wolfhounds don't do well in closed spaces.

They have a rough coat, but it does not need a lot of grooming. Their life span is usually six to eight years. 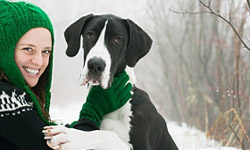 Great Danes are known for their size, but they fit right in with most families.
Nancy Falconi/Getty Images

Many people know Marmaduke, the Great Dane from the newspaper comics. That image is pretty accurate: These huge dogs are loving and lovable -- and like Marmaduke, because they're so big, they can innocently wreak havoc in a household, especially when they're playful puppies.

As it turns out, Great Danes aren't from Denmark at all. Originally bred to hunt wild boar, they're descended from mastiff and greyhound dogs in Germany and England. When hunting boar lost its appeal, the dogs were bred to be human companions. They were popular on large estates, and today they can fit right in with a family with a big, fenced yard. By the 1870s, the Great Dane had become Germany's national breed [source: Great Dane Club of America].

Great Danes are easy-going dogs. They're usually easy to housebreak and don't need much grooming. They love their people and need lots of interaction with the family. Because they're so big, they need to be trained well. Keep an eye on them when they play with small children, whom they can accidentally overwhelm.

How big are they? Male Great Danes may be as tall as 32 inches (81 meters) at the shoulder, weighing up to 140 pounds (64 kilograms). Females are a little smaller.

They take about three years to be fully mature, and usually live seven to 10 years.

Not just tall but also burly, male Saint Bernards may measure 27 1/2 inches (70 centimeters) at the shoulder or taller, and may weigh upwards of 200 pounds (91 kilograms). But don't worry: A gentle disposition has been bred into these canine giants for centuries.

About a thousand years ago, Bernard de Menthon, an Augustine monk, founded a hospice in the Swiss Alps to help travelers passing through the dangerous passes. The ancient origin of the Saint Bernard breed is unclear, but the monks began using large dogs to help with rescues. The dogs developed a keen ability to find people buried in snow drifts, dig them out, lick them to revive them and even lie on them for warmth until help came. They also were good at predicting avalanches.

The dogs became so good at rescue that teams of two or three were sent out unaccompanied. If one found a stranded traveler, the other(s) would go fetch the monks [source: The Complete Dog Book -- please link to LMI].

Saint Bernards love their families. Like any large dog, they need ample exercise and a place to run. The longer-haired variety needs a good bit of grooming. And, as with any giant dog --even one that's been bred to be kind -- keep an eye on the dog when he's with small children. You don't want it to bowl the baby over, even with kindness. 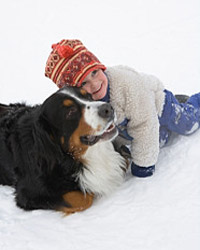 Bernese Mountain dogs are great with kids.
Per Breiehagen/Getty Images

There are four varieties of Swiss Mountain dogs, bred to be companions and working dogs for farmers in Switzerland. Two types -- the long-haired Bernese and the short-haired Greater Swiss Mountain Dog, both black with brown and white trim -- have become increasingly popular as family pets in the United States.

The short-haired Greater Swiss Mountain Dog is the larger, with males as tall as 28 1/2 inches (72 centimeters) and as heavy as 135 pounds (61 kilograms). The longer-haired Bernese may be slightly shorter and lighter. These dogs are gentle by temperament and usually good with children, and can be trained to pull carts or sleds. However, like other large dogs, Bernese mountain dogs wouldn't make good companions for apartment-dwellers [source: Dog Breed Info].

A couple of cautions: The Bernese suffered some from inbreeding a few decades ago, and can suffer from a variety of health problems as a result. In addition, they can sometimes be shy or overly sensitive, so choose one from a reputable breeder.

Both these dogs need good training. They need a lot of interaction with their families and are happier -- and better behaved -- when they have things to do. As with any giant dog, don't leave them unsupervised with small children.

If you've ever been out in a public place and seen someone walking what looked like a friendly bear, you've seen a Newfoundland. These are really big dogs: a male may be 28 inches (71 centimeters) at the shoulder and weigh as much as 150 pounds (68 kilograms) [source: The Complete Dog Book -- please link to LMI].

If you want a dog that doesn't care if the toddler climbs all over him and tugs his ears, the Newfoundland is probably the dog for you. Newfoundlands are just happy to be a part of the family.

Though their ancestry is murky, it's widely accepted that Newfoundlands developed on the Canadian island for which they are named, probably descended from dogs brought from Europe. On the island, they were bred to be working dogs on shore, in marshes or in the water. They can pull carts, and were often used to rescue drowning people due to their swimming ability and webbed feet.

Their disposition couldn't be better for families. Newfies are gentle, loving and generally unflappable. They love people -- especially small children.

Their long hair will require some grooming. Like any large dog, they need space, and like any family-oriented dog, they need love and companionship. Their life expectancy is about 11 years.

A word of warning: If you go swimming when your Newfoundland is around, you may be "rescued," even if you'd rather stay in the water!

Read on for lots more information. 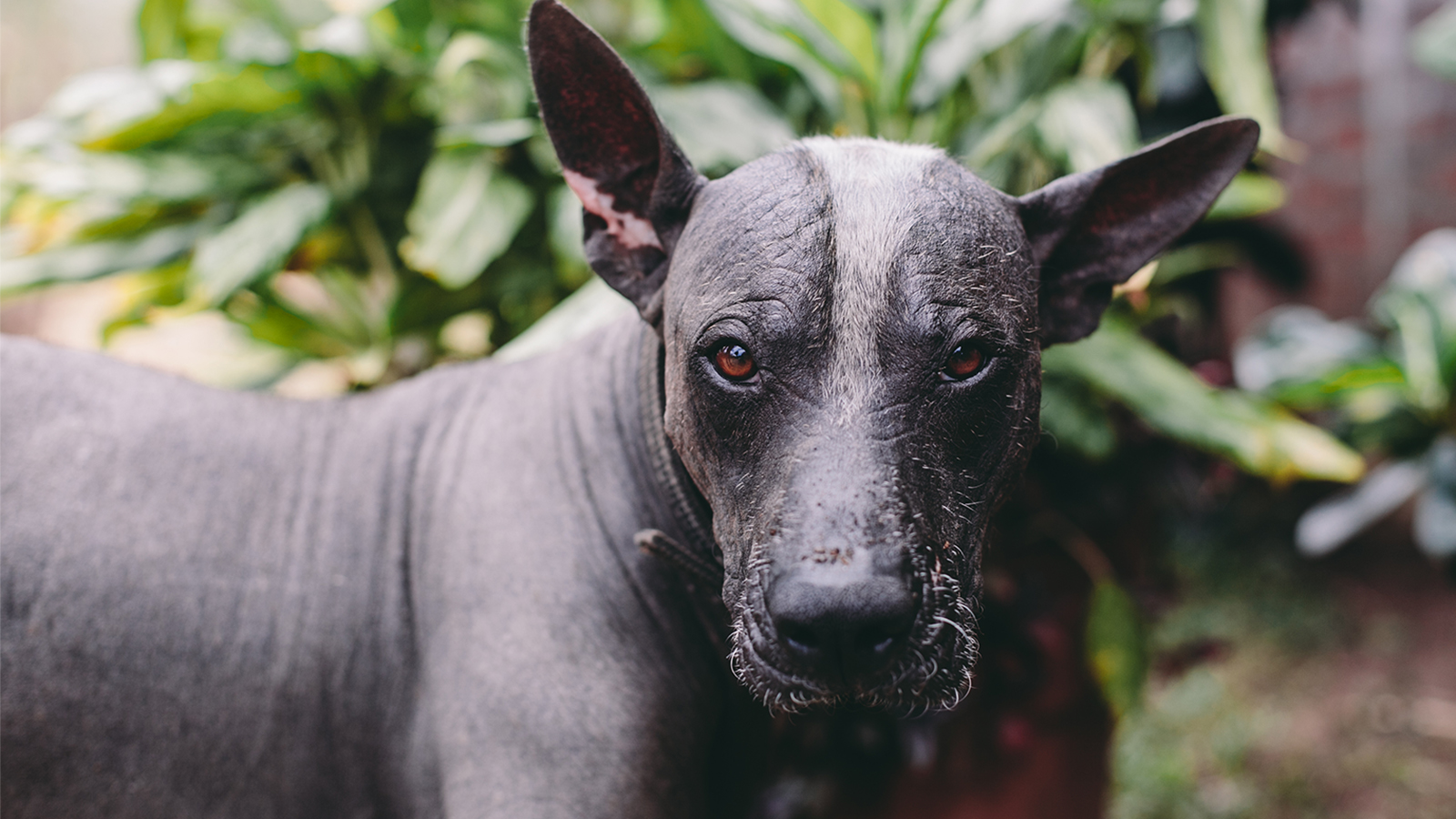 The xoloitzcuintli is one of the most ancient of dog breeds and even was considered a guide to the underworld by the Aztec and Mayan civilizations.