How to Tell if Your Cat Is Sick 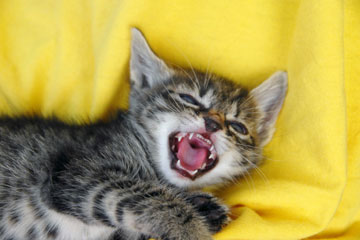 Examining your cat's mouth can tell you a lot about his health.
iStockphoto/Thinkstock

Every cat owner should know how to open a reluctant cat's mouth because the gums and teeth are good indicators of his or her health. The best way is to grasp the top of your cat's head with your thumb on one side and your fingers on the other. Tip your cat's head back so his nose points upward. Now, using your other hand, put one finger where the front teeth meet and push down gently with steady pressure on the lower jaw. As your cat's mouth opens, you'll have a few seconds to get a good look inside.

The color of the skin in your cat's mouth and on his gums tells an important story. A healthy cat usually has a tinge of pink. Stark white could be a sign of anemia. A yellowish cast is often a sign of liver trouble. A bluish tint may mean your cat isn't taking in enough oxygen, usually a result of a respiratory problem or poisoning. A word of warning, though:It's not unusual for a cat's gums -- and even the roof of his mouth -- to take on some of his coat color, especially as he gets older. For some reason, orange cats are also prone to developing harmless "freckles" (known as lentigo simplex) on their noses, lips, gums and inside their mouths. Black gums on a black cat aren't anything to worry about, but any gum changes should be reported to your veterinarian right away.

While you're looking around in there, you should also give your cat's teeth a check-up because tooth problems can lead to something more serious. Tartar build-up, for example, does more than cause bad breath. When tartar builds up, it can create pockets in the gumline that harbor bacteria, in turn causing infections that can actually enter your cat's bloodstream and infect his organs. You can avoid these problems by asking your veterinarian how to clean your cat's teeth at home and getting regular dental cleanings.

Your cat takes in so much of the world through his ears. Next, learn why it's important to check them out.