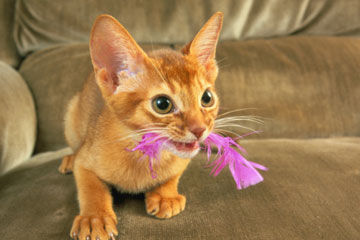 Could a nasty little critter be lurking in your kitty's ears? See more cat pictures.
Hemera/Thinkstock

One day you're scratching your cat's ears when you notice something unusual inside -- a dark brown, crumbly substance that looks sort of like coffee grounds. Your cat probably has ear mites, tiny, pinpoint-sized parasitic insects that live and breed in the ear canals. They feed on skin debris, cell fluids and blood, and can gnaw on the tissue of the ear canal. Ear mite infestations usually itch, so cats with ear mites will scratch excessively at the backs or insides of their ears -- sometimes to the point of producing raw patches -- shake their heads, or hold their ears at an odd angle.

Ear mites are a common infestation and are easily spread between cats and other animals. Treatment of ear mites involves removing the debris from the ears and using a topical insecticide in the ear canal to kill off the remaining mites and new mites that hatch out of eggs left behind. All animals in the house have to be treated -- if you don't, the ear mites that you get rid of from one cat will just take up residence in another cat's (or a dog's ) ears.

Before even treating your cat for ear mites, however, you need proof that they're there. Gently remove a little bit of the crumbly debris from your cat's ear canal with a cotton ball. Then examine it under bright light with a magnifier or spread it on a piece of dark paper. Any movement -- including tiny white moving specks -- means mites. Sometimes, mite debris is located deep in the ear canal where you can't see it. If you suspect your cat has mites, gently massage the back of the ear at the base between your thumb and forefinger. A cat with no mites usually enjoys it or, at worst, will fuss and try to get away. A cat who has unwanted company living in her ear canal will usually start scratching vigorously.

Other ear problems can cause itchiness and debris in the ear canal, so don't start home remedies for ear mites until you're fairly certain that's the problem. If you can't get proof of ear mites, it's better to take your cat to the vet so you can be sure that there's not something else going on.

If you know that your cat has a case of mites, read on to learn about some home remedies.

Treating a Cat With Ear Mites

Treating your cat's case of ear mites is a three-step process. The first step is to get as many tiny critters out of the ear canal as possible by cleaning the ear. You can use an ear cleaning solution (available at pet supply stores) or try almond or olive oil, but clear the latter with your vet first. Put several drops of the solution or oil into the ear canal and massage gently. Massaging will help bring debris up to the outer part of the ear where it can be wiped away with a cotton ball or tissue. Do not use cotton swabs, because one slip could puncture an eardrum. Repeat the cleaning procedure until the debris is gone.

Next, you need to administer an ear miticide. Products that contain pyrethrins, a natural insecticide, are available at pet supply stores. (Be sure to use a product formulated for cats -- pyrethrins can be poisonous to felines when administered in high doses. However, the levels in ear miticides designed for cats are perfectly safe.) Follow directions carefully, making sure to massage the drops in well and wipe away any excess. A single cleaning and treatment with ear drops won't do the trick, because just one surviving female mite with eggs will begin the entire ordeal anew. You must clean out your cat's ears every day and use the miticide exactly as directed (which may take a few weeks depending on the product).

Finally, you have to keep your cat from being reinfested with ear mites. A single ear mite can hide out deep in your cat's fur -- only to crawl back in after all the excitement of treatment is over. Microscopic mite eggs can hatch days after a treatment, so it could take a few weeks before you can safely assume your cat and home are mite-free. Cats with ear mites also need regular treatment with flea products to knock out those adventurous mites that go exploring elsewhere.

If your home remedies don't knock out ear mites within a few weeks, or the skin in or around the ear becomes raw or inflamed, you need professional help. Your vet can prescribe medications that work faster than the over-the-counter ones. An untreated ear mite infestation can lead to a skin disease or to an ear infection. If your cat has itchy ears, shakes her head, flattens her ears, and has discharge from the ear canal -- but no mite debris or live mites -- check with your vet. It could be a yeast or bacterial infection or another type of ear problem.

How do cats purr?
You're Feeding Your Cats All Wrong
12 Regal Facts About Siamese Cats