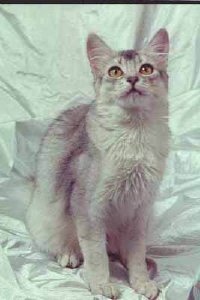 ©2006 Publications International, Ltd. Though they can be quite serious for your cat, humans cannot catch feline diseases.

Before we go any further, there are a few myths to put to rest. There are a couple of cat diseases that have names that sound a little too close for comfort to some very serious human diseases. Feline leukemia virus (FeLV) does cause leukemia...in cats and in cats only. FeLV does not cause leukemia in people, and it can't even live in the human body. There's no danger that an FeLV-positive cat is going to make her owner sick.

Feline immunodeficiency virus (FIV) sounds a lot like the human immunodeficiency virus (HIV), the virus associated with AIDS. That's no coincidence: FIV and HIV belong to the same class of viruses, but that's where the similarities end. FIV does not infect people and can not cause human AIDS. Some folks -- and even some vets -- call FIV "feline AIDS" as a quick way of describing what the virus does. Unfortunately, the name just adds to the confusion. AIDS is a human disease, and FIV is a cat disease.

Cats can get some of the same diseases that people also get: diabetes, arthritis, heart disease, and cancer, to mention a few. But since none of these diseases are contagious, there's no way you can catch them from your cat.

Generally, cats are thought of as being less dangerous than dogs (you don't see any front-page stories about a vicious Siamese that bit the arm off some poor delivery person), and their reputation for cleanliness gives the impression that they carry no diseases at all. But in fact, most vets would rather face an angry dog than an angry cat. (Cats can bite you and slash you with all four feet.) And there are a few things you can catch from your cat. Here are some of the human-cat diseases you should know about:

Fleas. These hardy little insects bite warm-blooded animals and use their blood for food. Fleas are so tiny that a single bite is barely noticeable (unless you or your cat are allergic, in which case it itches like crazy). A full-blown flea infestation, however, can take so much blood from an animal that it becomes anemic.

Fortunately for us, fleas prefer the warmer body temperature of cats and dogs to our 98.6 degrees Fahrenheit. But a hungry flea will take any port in a storm, and a flea will jump from an infected cat to carpets, drapes, furniture, and later onto you for a quick snack.

There's some concern that diseases carried in the blood could be passed through fleas but that would mean the flea that bites you would have to have bitten another person with a blood-borne disease, which is possible but highly unlikely. The largest dangers of fleas are the annoyance and itching of the bites.

Ticks. These are also blood-sucking insects. Ticks are somewhat larger than fleas, especially once they've attached themselves to a host and swell up. Like fleas, ticks aren't as likely to abandon your cat for you, but it can happen. Also, if your cat has been somewhere that ticks hang out, the odds are either you've been there, too, or your cat has brought them home. Again, the most common problem is annoyance. However, ticks can carry two serious diseases: Rocky Mountain spotted fever and Lyme disease.

The best protection against both of these diseases is prompt and complete removal of ticks. A few generations of Boy Scouts were taught that the best way to remove a tick is to burn its fanny with a cigarette or a smoldering match head. Well, besides the fact that Boy Scouts shouldn't be smoking, the evict-a-tick-by-fire strategy is not the best choice.

The best way to remove a tick is to use a pair of tweezers to grasp the tick as close to the skin line as possible. Pull it straight out, firmly but gently, with slow, even pressure. This should remove the entire tick -- including the head. Ticks are very hardy, so drop it in a small bottle of rubbing alcohol to make sure it's dead (and to preserve it for your vet, if your cat shows any signs of illness). Then, once you have removed the tick, dab the area with a topical antiseptic or antibiotic ointment.

Worms. These little fellows can live in your digestive tract without you realizing they've taken up residence. Worms can be picked up by careless handling of litter boxes and soil that cats have used as a litter box. Children are at particular risk for picking up worms this way.

Worms are often hard to detect, since they live inside the body. The tip-off is usually some sort of digestive problem that doesn't go away and has no other explanation. It's also a good idea to take a sample of your pet's stool to the vet for microscopic examination of worms and worm eggs. Worms can be treated quickly and safely as soon as they are diagnosed.

Ringworm. This isn't really a worm at all. It's a fungus that takes up residence on the skin, causing bald, scaly patches that are usually edged by a red ring. Cats are notorious for being asymptomatic carriers of ringworm, which simply means they can carry the fungus into your home (and onto you) without ever showing any signs themselves. Of course, many cats do show the signs, too.

Whether your cat shows the signs or you do (or both of you do), you'll most likely have to treat the whole house, as well as all the cats in the home. Ringworm spores can survive in the nooks and crannies of your home for months. Treatments might include disinfecting your home, topical ointments or lotions for the scaly patches, dips or baths for your cat, and oral medication.

Rabies. This is serious business. Rabies is a fatal disease. What's more, once the disease has taken hold, there's not much that can be done to stop it. The best defense against rabies is a strong offense. An indoor cat has nearly no chance of being exposed to rabies, but the safest bet is to give your cat a rabies vaccine and keep it current. Rabies is passed in the bite or scratch of an infected animal, so every time an outdoor cat gets in a scrape with another cat or tangles with local wildlife, there's a chance she'll contract it.

Rabies infects all warm-blooded animals, including people. Any bite or scratch from an animal -- even one that you know and that's up-to-date with its rabies shots -- should be treated as potentially dangerous. It's never an overreaction to seek medical care for a cat bite or serious cat scratch.

©2006 Publications International, Ltd. Cat scratch fever is a fancy name for a wound inflicted by a cat that becomes infected.

Cat scratch disease (also referred to as cat scratch fever). Some folks insist that cat scratch fever is a myth, but it really is a medically proven disease. Cat scratches and bites can turn into serious infections literally overnight. Cat bites, in particular, need careful attention. Wash bites or serious scratches thoroughly and call your doctor for advice. You may need a tetanus booster or an antibiotic shot to prevent infection.

Toxoplasmosis. Toxoplasma gondii is a protozoan parasite (one-celled organism) that can cause a neurological disease in humans. This protozoa is passed in the stools of infected cats, who in turn catch it from infected animals they've killed and eaten. Cats are what's called the primary vector for the toxoplasma organism, which means the life cycle of the parasite depends on spending at least a little time in the body of a cat.

Cats don't usually show much in the way of symptoms when they're infected with toxoplasmosis -- and a person who picks it up usually doesn't either. There may be some mild symptoms that are passed off as a cold or the flu but that's usually about it. The two major exceptions are people whose immune systems are weakened (such as someone on chemotherapy or a person with AIDS) and pregnant women.

Perhaps as many as 70 percent of adults have already been infected by toxoplasmosis and are now immune. Although cats are the primary vector for this parasite--and it is theoretically possible to pick up toxoplasmosis from careless handling of litter boxes or inhaling toxoplasma spores when cleaning the litter box--most people get toxoplasmosis from digging in dirt contaminated by cat feces or handling or eating raw or undercooked meat.

These are the basic diseases that you have to worry about. In the next section, we will show you the early warning signs that you cat has contracted a dangerous disease.