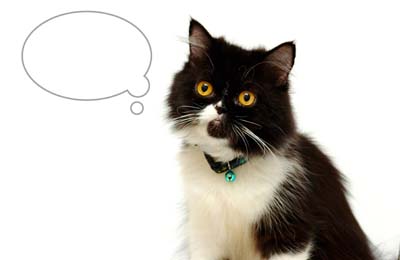 ©2006 Publications International, Ltd. Unfortunately, your cat can't tell you what's wrong with her.

"Forewarned is forearmed," goes a fine old folk saying. In a little less flowery terms that simply means if you know what to expect -- or what to look for -- you're going to be better prepared to handle whatever comes your way.

We can tell if a person is feeling poorly by his facial expression...or because he's one of those folks who loves to tell you about every little ache and pain. Well, a cat's skin is completely covered in fur, she only has a few facial expressions, and she can't talk, so it's up to you to know the subtle -- and not-so-subtle -- signs that something could be wrong.

Whenever something isn't quite right with your cat, there are usually early warning signs. Unfortunately, the signs may be so slight when they first show up, you can easily miss them. Other times, you might notice something a little different about your cat, but it appears harmless -- and even cute. Keep in mind, the early warning signs may build up so slowly over such a long time that by the time you notice them they aren't early warnings anymore.

When you have a sick cat, nothing is worse than 20/20 hindsight -- that terrible feeling of not seeing something coming when all the signals were there. To help spare you from all of that, here are some important things to look out for:

Changes in behavior. Has your usually friendly cat become more moody, shy, or touchy about being petted lately? Or has your usually moody or shy cat become noticeably more friendly? Any kind of personality change in a cat could be a signal of a developing cat health problem.

New behaviors or increased frequency of behaviors may also be an early warning, such as a cat that never drank from the faucet suddenly learning the trick or an "itchy" cat scratching or rubbing her ears more often. Likewise, if your cat seems thirstier (drinks more often or for longer periods of time), she could be telling you she's got a kidney problem, early diabetes, or simply that it's a little too dry in the house.

You see, it's important to stress here that these behavioral early warnings are just that: warnings. They don't necessarily mean there's a serious problem with your cat, that she has something that could develop into a serious problem, or even that there's anything wrong with her at all. If you catch an early warning sign, just keep a closer eye on your cat to see if the warning sign continues or worsens.

Make a call to your veterinarian at your earliest convenience and discuss what you've seen. Your vet may suggest making an appointment for an exam or just ask some questions and give you some other clues to keep watch for.

Remember, any sort of behavior change may be significant, no matter how slight or unimportant it might seem. Being a good cat watcher not only helps you catch emerging health problems early -- when they have the best chance of being successfully treated -- it can give you a deeper appreciation for the beautiful and complex behavior of cats.

Change in appearance. Does there seem to be a little less of your cat around these days? Or perhaps a little more? Assuming her diet and appetite are the same, a gain or loss of weight could be telling you something potentially more serious is happening inside your cat's body. Does her hair seem thinner? Coarser? Has it lost its healthy shine? A dull coat, excessive hair loss, or fur that feels dry, coarse, or brittle are important signs of possible health problems, too.

Of course, changes in appearance are natural with advancing age, including some loss of body bulk or somewhat scruffier-looking fur. But even these normal changes are important signals; they're saying you now have a senior citizen cat whose needs will be changing along with her body.

Changes in appetite and elimination. Cats are notorious for being picky eaters. But, in fact, finickiness isn't really a normal part of cat behavior. In general, cats will turn up their nose at food for the same three reasons kids will: It doesn't taste good; they're holding out for something better (and know they'll get it if they refuse what they've been given); or they don't feel good.

If your cat has been steadily eating the same diet, then suddenly loses enthusiasm, don't assume she's just gotten tired of the same old food. If we can eat the same breakfast cereal or have the same coffee and Danish pastry every morning, there's no reason why your cat can't be satisfied with the same menu every day. Going off her food (or, for that matter, becoming ravenously hungry) is another way your cat lets you know she's not feeling well.

Since cats use the litter box, you may not notice a change in elimination habits right away. As unpleasant as it may seem, it's a good idea to at least be aware of what you're scooping or dumping from the cat's litter. A marked increase or decrease in urine or stool, the presence of blood or mucous, or a particularly pungent smell (when the box has been recently cleaned) are all warnings of possible trouble ahead.

Likewise, a cat who is litter-box trained but suddenly seems to forget is sending you a message. It could be a behavioral, stress, or environmental thing, but it could also be triggered by worms, a bladder infection, or other potentially serious problems.

It's often hard to pinpoint if a change is strictly in behavior, appearance, or appetite and elimination. For example, pacing the floor might be considered either a behavioral change or an indication of a hyperactive thyroid gland, and a cat who has scratched off patches of hair has a change in appearance that could come from a change in behavior. What's more, changes can happen over a period of days, weeks, or months--or they can just pop up from one moment to the next.

Sudden or abrupt changes are easier to notice. Long-range changes add up over time, usually so slowly we don't catch them until they've made some significant progress.

Let's go back to diabetes as an example. A cat developing diabetes will drink more and will make more frequent trips to the litter box, producing larger volumes of urine. It would be almost impossible to notice your cat making just one extra trip to the water bowl or litter box in the course of a week, and it would still be fairly difficult even when increased to an extra trip every day. And even several extra trips per day can slip past your notice, too, especially since cats are nocturnal and most of the additional water or litter-box breaks could be coming while you're asleep.

By the time you're thinking, "Gee, that cat seems to be spending a lot of time at the water bowl or litter box," she's probably at the several-extra-trips-a-day level. You must work at training yourself to notice your pet's daily habits so you can detect and report any subtle and gradual changes to your vet.

Now that you've noticed a problem with your cat, you now have to decide if this is a problem you can solve at home or if you need the help of your vet. We will offer you some tips to make this decision in the next section.