Can owning a pet help you live longer?

Other Health Benefits of Pets 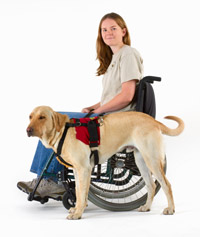 Stories abound about the healing abilities of pets. For instance, one boy who did not talk for six years finally chose to start talking after a therapy dog visited his school [CBS News]. Organizations, such as the Delta Society, train dogs to help disabled people perform tasks. The Delta Society feels so strongly about the health benefits of animals to humans that it is dedicated to spreading knowledge about the issue as well as services.

The psychological benefits of pets can make a big difference in someone's life. This seems to be especially true for kids who are struggling to deal with death or illness in the family. Certain studies have concluded that children with dogs cope better with these serious situations [source: Howie]. Researchers believe this probably has to do with the obvious fact that pets provide love and with the fact that the structured routine required for taking care of a pet is a positive for the child. Kids aren't the only ones who benefit from pets during these difficult times; the spouses of cancer patients said they believed pets helped them cope as well.

The health benefits of dogs go beyond psychological factors. As it turns out, dogs might be useful in the field of medicine to detect and predict medical problems. In one study, trained dogs were able to identify patients with bladder cancer by smelling their urine [source: Willis]. Although the dogs were not accurate all the time, they identified the right patients at a rate much better than chance. This revealed surprising evidence for the use of dogs as well as further knowledge about the effects and detection of bladder cancer.

What's perhaps more amazing, however, is that certain dogs can predict when their owner is about to suffer an epileptic seizure. Trainers can teach some dogs to help a person in various ways during a seizure. In addition, some of these dogs end up developing the mysterious ability to actually warn the owner before he or she suffers a seizure [source: CBS News]. The group that trains these dogs, Canine Assistants, claims that most dogs develop the prediction abilities within merely a year of being with their owner. Researchers are at a loss to explain how exactly dogs can do this.

Many programs throughout the U.S. allow prisoners to train dogs to perform services for disabled people. Not only does this help organizations meet the demand for service dogs, but it can rehabilitate prisoners, contributing to better behavior [source: Price].