by Mark Mancini Nov 12, 2019
The Maine Coon cat (top left) and the Norwegian Forest cat (bottom right) are both big breeds, and while there lots of similarities between them, there are many differences as well. Rob Stothard-Getty Images/Soon Koon-Flickr (CC BY-ND 2.0)/HowStuffWorks

We'll never resolve the "cat versus dog" debate, but when it comes to diversity, man's best friend is the clear winner. Domestic dogs are way more variable than their feline counterparts. On top of the vast differences in ear shape, snout length and limb proportions, our canine pals come in a huge range of sizes — the largest dog breeds are around 40 times bigger than the smallest ones.

Still, it's not like all cats are created equal. Here's an overview of two plus-sized breeds with personalities to match their statures: the Maine Coon and the Norwegian Forest cat.

As they say in Norway, there's no such thing as bad weather, only bad clothing. To endure the harsh winters of Scandinavia, the Norwegian Forest cat — also called the "Wegie" (pronounced "wee-gee") — evolved a double layer of thick, waterproof fur. Mystery surrounds the breed's origins; it may be descended from Siberian cats or Turkish longhair cats who entered present-day Norway.

Regardless, written records tell us that a new and distinctive type of domesticated cat had arisen in this corner of Europe by about the year 1000 C.E. The ancestors of today's Wegies were likely used to keep Viking ships and settlements clear of mice.

Full-grown adults of both sexes are very muscular animals — and heavy, to boot. Mature females usually weigh 9 to 12 pounds (4 to 5.4 kilograms) while males regularly tip the scales at 16 pounds (7.3 kilograms) or more. Accordingly, the Norwegian Forest cat is one of the biggest breeds available.

But the Maine Coon has it beat. Capable of weighing 25 pounds (11.3 kilograms), this all-American beauty is downright gigantic. In fact, on May 22, 2018, a Maine Coon named Barivel set a new Guinness World Record as the longest known domestic cat. From one end to the other, he measures 47 inches (120 centimeters) in length. By the way, the previous record-holder in this category was another Maine Coon. Sounds like they've got a furry dynasty going.

True to its name, the Maine Coon is a product of northern New England. Here again, we've got a creature whose backstory is unclear. According to one popular fable, the first Maine Coons can be traced to (of all people) Marie Antoinette. During the French Revolution, she supposedly had her beloved cats shipped to North America, where they interbred with local felines. The truth may be less glamorous, but Maine Coons probably do have European roots. Historians think the breed is descended from long-haired cats whom seamen ferried across the north Atlantic.

Some enthusiasts think the Norwegian Forest cat is the Maine Coon's direct ancestor. (After all, we know Norse settlers occupied modern-day Newfoundland during the 11th century C.E.)

The idea speaks to the many similarities between these long-haired, big-bodied breeds. Yet as Sandra Cagan will tell you, there are plenty of differences as well.

A resident of Florida, Cagan owns the Orlando Cat Café, a coffee shop where the patrons get to hang out with adoptable felines who need good homes. She personally owns two purebred Maine Coons and is well-acquainted with the breed's idiosyncrasies.

"The Maine Coon has a wider muzzle than a Forest cat," Cagan explains via email. In contrast, the latter breed has a flattened forehead, straight nose and triangular-shaped skull, giving it what Cagan describes as "more of a 'regular cat face.'" Meanwhile, with its high cheekbones and broad snout, the Maine Coon looks rather lion-esque — at least facially.

Other distinctions reside in the fur. Although Wegies and Maine Coons are available in lots of different colors, there's an iconic hairstyle specific to each breed.

"Both breeds have distinctive ear tufts, but the Maine Coon's are larger," says Cagan. Also, while Wegie tails end in pointed tips, the end of a Maine Coon's tail is bushier and less shapely.

Beyond looks, the felines may communicate differently. "Maine Coons tend to be very vocal; they are known for their chirping sounds," Cagan tells us. "Norwegian Forest cats tend to be quieter." That said, they both like to emit contented purrs, which can get fairly loud.

In terms of disposition, Wegies and Maine Coons are often described as "dog-like." Norwegian Forest cats love socializing with their favorite people while Maine Coons engage in all sorts of canine behaviors. "I know of several Maine Coon owners who have taught their cats to give 'high fives' or 'shake paws' like a dog would do," says Cagan.

Not only are the big guys easy to train, but they've got an endearing habit of carrying their toys around like excited terriers. "Many of them also play fetch," Cagan adds. What's more, she notes that several owners have taught their Maine Coons to use leashes. "One of my two loves to walk on his leash, the other not so much," she tells us.

So come to think of it, maybe we can settle the whole cat versus dog debate. If you're in want of a pet and feeling indecisive, just split the difference and get yourself a Maine Coon. Or a Wegie.

Now That's Interesting
Norwegian Forest Cats and Maine Coons might be considered examples of Bergmann's Rule — which states that warm-blooded animals in cold places tend to be bulkier than members of their own species who live in warmer regions. This is because larger individuals with compact physiques may have an easier time retaining body heat.

How to Stay Warm in Your Freezing-cold Office 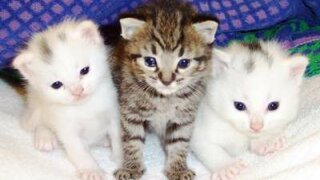 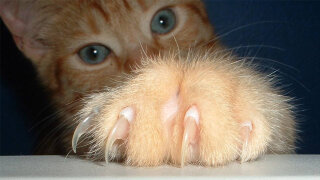 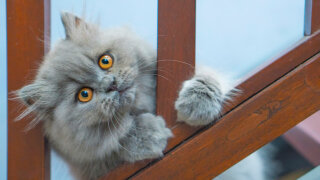 8 Facts About Persian Cats, Kings of the Lap-Nappers