Can I take my pets on public transportation? 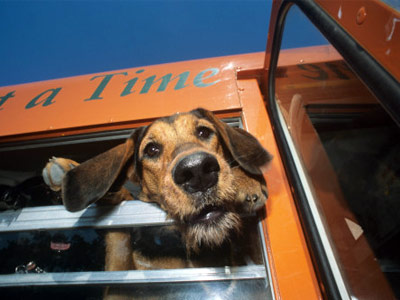 Public transportation is a quick and easy way for you to get around town, but your pet may not be able to ride with you. See more pet pictures.­
Allison Leach/Taxi/Getty Images

In 2007, riders on the 331 bus in the United Kingdom began to notice a fellow passenger -- a white cat that would board the bus several days a week at the Churchill Road stop and exit near a fish-and-chips shop about 400 meters (.25 miles) down the road. Passengers affectionately nicknamed the kitty Macavity, after the mysterious cat featured in the T.S. Eliot book of poems "Old Possum's Book of Practical Cats," once they realized the cat was riding the bus without its owner [source: The Daily Mail].­

Could you blame this resourceful feline? Public transportation is such a convenient, cheap and eco-friendly way to travel -- and you can even nap while you do it! Public transportation is a great way for people to get around, especially in major cities where roads are clogged and parking is scarce. There's only one question, though: Can your dog or cat (legally) ride with you?

­The good news is that certain buses, trains, trolleys and light rails allow pets. However, don't get your best friend leashed up yet -- a number of restrictions apply, and you're out of luck if you're traveling Greyhound or Amtrak, as neither allows pets on its buses and trains.

There's one exception to that rule: If you have a service animal, th­e Americans with Disabilities Act (ADA) allows your animal to accompany you to any public place, from restaurants and hotels to (you guessed it) buses and trains. However, service animals are workers, not pets, and many more restrictions apply to them. Generally, you'll have more luck if your pet is small enough to fit in a large bag or small carrier. If you have a large dog, some modes of public transportation in certain cities will allow you to take it with you, but those transportation companies are much fewer than those that allow small pets. Recently, restrictions in some parts of the United States against transporting pets were amended to allow some pets to use public transportation and receive care during emergencies [source: Texas A&M University]. After Hurricane Katrina, the U.S. government realized that some people refused mandatory evacuation on public buses because they could not take their animals with them.

To learn more about places where pets are allowed, take a look at the next page.

Pets on Trains and Buses

With some exceptions, there are a few types of pets allowed on public transportation:

You should check with your local authorities, but remember that Amtrak and Greyhound only allow service animals. Expect to pay the fare for your pet as you would for yourself, and expect to be allowed to board during certain hours (generally during non-rush hours). In addition, unruly, aggressive, noisy or foul-smelling animals can be refused -- even if they meet all the company's requirements.

Even with the handy guide above, be sure to verify with the public transportation company before you head out to make sure the rules haven't changed. For more information, visit the links on the next page.

What about Mr. Whiskers?

You might have noticed that most of these places mention dogs. That's because many rules don't address cats. You might think that since cats are about the same size as the small dogs allowed, cats should be granted the same privileges. However, you should check with the public transportation company you plan to use, just to be sure. ­

5 Things Everyone Gets Wrong About Betta Fish
Interactive Database of NYC Dog Names Provides Endless Distraction
Is fostering dogs too hard on kids?