Jet lag can make people -- and possibly their pet -- feel unexpectedly sleepy, sluggish and disorientated. It can also mess with appetite and digestion, cause other sleep-related problems and leave our globetrotting traveler suffering a case of general malaise.
© iStockphoto/Chris Wells

­­Jet lag is a modern malady that accompanies long-distance travel. In the past, people couldn't journey fast eno­ugh to really throw their systems out of whack, but in today's world of fast cars and even faster planes, it's a whole other story. The reason for this stems from the biological rhythm most commonly known as the circadian rhythm. Like similar biological clocks that follow tidal, lunar and seasonal cues, circadian rhythm is dictated by a very familiar fixture -- the daily appearance of the sun.

The field of chronobiology (which concerns how life is affected by time and other rhythmic processes) works to understand how these various internal clocks function and interact. Basically circadian rhythm is dictated by light and darkness. During the daytime (or exposure to artificial illumination), light triggers a reaction in a special eye pigment, which activates a response in the neurons of the hypothalamus, which in turn jumpstarts a number of different biological processes. At night, the lack of light causes other developments to occur. Humans' natural circadian rhythm is about 25 hours long (although the sun resets it after 24) and when it's disrupted by events like crossing time zones, chances are you'll have some problems.

That's because your circadian rhythm affects you head to toe. You might not have realized it, but your body is a busy factory performing many different tasks throughout the day. Besides telling you when to sleep and when to rise, your circadian rhythm regulates body temperature, blood pressure, digestion, urine production, hormone secretion and more. This means that when people travel, the sun isn't in sync with their internal clock.

If you slip off your regular cycle, your body is still going to try to accomplish everything at the regular time, as opposed to when you need it to. Not everyone is affected to the same degree by jet lag, but generally, you'll need a day to recover for each time zone hopped. By regulating food intake and other behaviors, it's possible you can be back to normal in a timely manner -- preferably before it's time to head back home.

Now that we have a better idea behind what causes jet lag, on the next page, we'll find out if our furry friends suffer the same fate. 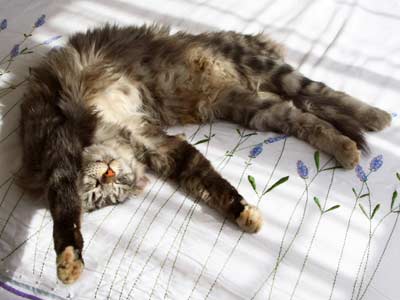 If you want you pet by your side on a global adventure, it's possible you both might end up battlin­g a case of jet lag.
© iStockphoto/Victoria Soares

­You might think your endlessly dozing pet is immune to the effects of jet lag, but you could notice it acting a little out of whack after a long leg of traveling. That's because almost all life on the planet follows a daily circadian rhythm to some degree or another -- you have to travel to points like deep ocean depths before the effects of daylight don't touch the locals. While some animals may seem immune to jet lag or able to shake it off fast, there is the potential for it after a journey.

It's important to note, however, that different species react in different ways to the circadian cycle. Animals with a strong sense of smell might be prompted to an active nightlife, while those who rely heavily on sight might be up at dawn. The reaction you see when you hit your destination could depend on what's natural for your pet. For example, pets like cats and dogs have been shown to rely less heavily on a daily circadian rhythm, while other animals like hens and monkeys appear to have circadian rhythms that more closely model those of humans.

Apart from jet lag, another component to the trip that could leave your pet feeling unwell after a plane ride is the altitude during the flight. Malaise, sore muscles, dehydration, headache and fatigue are all potential symptoms you might observe in your pet's behavior.

People, and presumably some pets, often have a better time recovering from jet lag when they're headed west. This is thought to be because the adjustment to a longer day is typically easier than switching to a shorter one. Unfortunately, unless it's a one-way trip, that jet lag is just going to catch you on the flip side.

There's currently no cure-all for jet lag, although researchers are experimenting with different new medicines that may be able to take the edge off. A number of preventive steps can help ease the transition into a new time zone, including carefully planning so you're fully rested beforehand and departure and arrival times that work well with your personal habits. You can even begin the adjustment before you leave, slowly shifting your bedtime to accommodate the upcoming time switch. Most cats and dogs probably have one up on their owners on this score -- flexible sleeping patterns make the transition easier.

Another possibility is diet. It turns out animals -- people included -- have a food clock in addition to a time clock. This useful system lets animals extend their schedule if they're unable to find food. Once food's been found, it's time to crash, so people can try to use this to their advantage by fasting and then enjoying a timely meal at their destination. Different foods can also help increase your pep or get you ready for bed.

If you do have a case of jet lag on your hands, there are a few things you can do to ease those ill feelings: spend time in the sun or soak up a dose of light therapy, stay hydrated and get some exercise. These activities will be good for you, and your pet will probably enjoy them, too.

On the next page, you'll find links to lots more information about traveling with pets, taking siestas and tips for tackling jet lag.

How to Choose the Best Dog Breed for Your Family
Why Do Dogs Have Wet Noses?
Do feral cats spread disease?