Where exactly do they store pets on a plane? 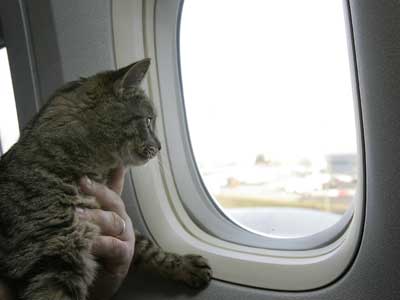 Not every pet makes its way aboard a flight as checked luggage. Emily the cat, seen here, disappeared in late 2004, only to reappear later as a stowaway on a flight to France. She was eventually returned to her home in Milwaukee. See more pet pictures.
AP Photo/Christophe Ena

­Driving with a pet in the car can be a major hassle. Sure, your cat or dog may be content to sit there quietly for the duration of the ride, but it's also quite possible that your pug will spend the whole time whining from the confines of his crate or that your c­at will take refuge atop your shoulder -- and what happens if there's a traffic jam? What if Fido needs to go for a walk? What if Mr. Bigglesworth coughs up a hairball?

If you've ever experienced such adventures, the prospect of bringing your pet aboard a commercial airliner might sound like a nightmare at 35,000 feet or so (10,668 meters). However, the prospect of leaving a beloved, four-legged friend behind is often unthinkable. For this reason, most commercial airliners allow passengers to travel with their pets. In fact, an estimated 2 million pets and other animals take to the skies each year in the United States alone [source: U.S. Department of Transportation].

­Pets, however, aren't people. Even if they were capable of enjoying all the amenities offered in first-class seating, they wouldn't be eligible. The­y may be the love of your life, but onboard an airliner, they generally fall into one of three different categories: carry-on baggage, checked baggage or cargo.

Just where do airlines store this oh-so-cuddly baggage? Read the next page to find out.

Know How the Caged Pet Flies 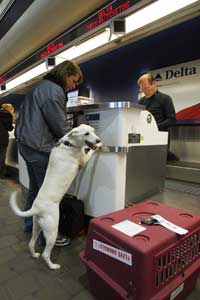 A traveler and her dog check in for their flight at New York's LaGuardia Airport.
­AP Photo/Dima Gavrysh

If you've ever read Jim Davis' "Garfield" comic strip, you've probably observed one of the orange feline's frequent attempts to airmail Nermal the kitten to Abu Dhabi, capital of the United Arab Emirates. It's easy to laugh at such exploits, at least until you consider the possible consequences. Assuming Nermal's box made it through security, the airline might store the kitten in an unpressurized cargo hold without temperature regulation. Even if Nermal survived without food or water for the duration of the trip and didn't endure lethal temperature extremes, he might well have to be euthanized when the plane touched down in the Middle East.

­Luckily, such tragedies are rare today, but flying can be a dangerous and stressful undertaking for a pet, even if feline-plotted foul play isn't a factor. Most airlines recommend that a pet be at least 8 weeks old and properly weaned before it flies. Even if your pet is a healthy adult, it might not be a good idea to take it on a plane. Some snub-nosed cats and dogs have trouble breathing, and some dog breeds, such as pugs, overheat easily, making them less-than-ideal checked baggage.

Still, most airlines allow you to ship pets, unaccompanied, as cargo. The exact rules regarding their transport vary depending on the airline, destination and animal breed, but this method of transportation tends to see a pet confined to an approved carrier in a cargo hold.

Airlines allow customers to ship pets as cargo year-round in climate-controlled sections of the cargo hold, but often place restrictions on transport during particularly hot or cold weather conditions. The reason for this is that while the cargo area is temperature-controlled, other parts of the terminal may not be.

Baggage handlers typically strap animal crates in place and may wrap them with perforated air cushion rolls. Cargo hold size and conditions depend greatly on the type of plane and the airline that operates it. In many models, the baggage area takes up the level directly beneath the passenger cabins.

In the United States, airlines typically won't accept pet baggage if the forecast calls for temperatures bellow 45 degrees F (7 degrees C) or above 85 degrees F (29 degrees C) in order to meet regulations governed by the Animal Welfare Act. With proper acclimation certification, however, some animals may be permitted to endure hotter conditions or temperatures as low as 20 degrees F (-7 degrees C).

If you choose to bring your pet along as checked baggage, it will travel under the sam­e conditions as those shipped as cargo. However, if you bring it along as a carry-on, the lucky cat or dog will get to experience the same flying conditions as you do. The only difference is that while you get to recline back in your seat and snack on peanuts, your furry friend will have to remain inside its carrier for the duration of the flight. If your pet happens to bark or meow a lot in confined spaces, be prepared to endure some hateful looks from your fellow passengers.

Of course, for the truly pampered pet, chartered flights are always a pricier alternative. One company, Companion Air, even hopes to offer pet-friendly flights in which the animals ride in specially designed passenger cabins.

Explore the links on the next page to learn even more about traveling with pets.

Know What You're Getting Into

Before you book yourself a Hawaiian vacation with the special subhuman in your life, make sure you know exactly what to expect from your airline and destination. Some airlines only allow warm-blooded mammals and birds to travel as personal pets. As for your pet primate, don't get your hopes up. Many airlines want no part of your monkey business, even if you pull an idea from the Hunter S. Thompson playbook and attempt to pass the hairy brute off as your own son. If your monkey happens to be a certified service animal, however, you may get to enjoy the in-flight movie together after all.­