Browse the article Why Do Dogs (and Cats) Eat Grass? 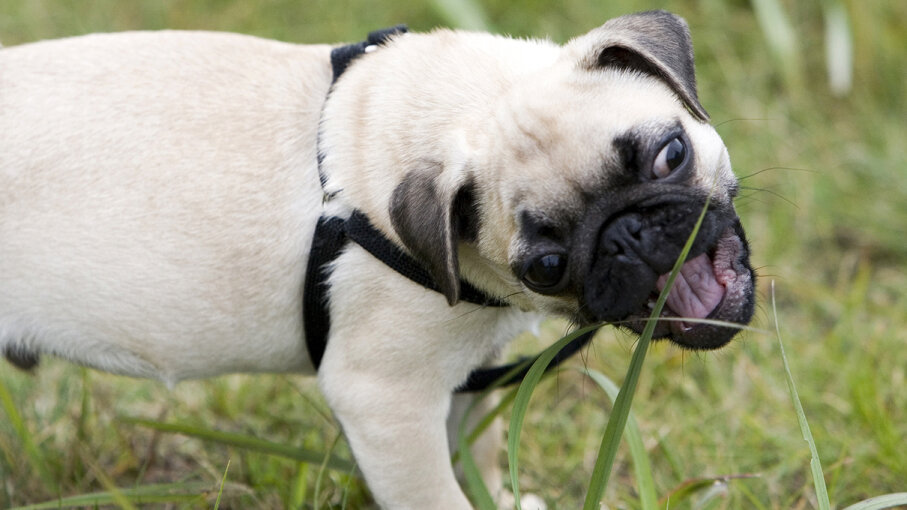 Nobody is really quite sure why our furry friends eat grass. Ariane Lohmar/Getty Images

If you're a dog owner like me, you're used to seeing your dog eat just about anything. My Loretta Lou is a chocolate Lab. Once, when she was 2, she ate an entire jar of cranberry pills — extra strength. How she got the top off is still a mystery. I rushed her to the vet, who gave her medicine to make her vomit. One dose. Two doses. Nothing. Little Lou never threw up, nor did she have diarrhea. All she wanted to do afterward was catch a Frisbee. My vet looked puzzled.

Loretta also eats grass every spring and summer, which is no surprise. Dogs often eat grass. But unlike her daycare buddies, Loretta never throws up. One grass blade. Two grass blades. Three or four. Nothing. Not even a hack or a cough. Loretta has a cast iron stomach.

I'm not sure why Loretta, and by extension most other dogs, eats grass. No one is. Most people believe dogs eat it because they are lacking something in their diets, or because they are ill. That simply isn't the case.

In 2008 researchers at the University of California at Davis tried to cut through the weeds and shed some light on the mystery. They sent out surveys to 25 veterinary dog-owning students. All reported their canines ate grass. None said they observed any signs of illness before their dogs chowed down. Eight percent said their dogs hurled afterward.

Scientists then opened the survey up to 3,000 people who answered a series of online questions (researchers ultimately pared the useable surveys down to 1,571). Sixty-eight percent saw their dogs eating plants (mostly grass) on a daily or weekly basis. Only 8 percent showed signs of sickness beforehand. Twenty-two percent watched as their dogs vomited afterward.

"Contrary to the common perception that grass eating is associated with observable signs of illness and vomiting, we found that grass eating is a common behavior in normal dogs unrelated to illness and that dogs do not regularly vomit afterward. Vomiting seems to be incidental to, rather than caused by, plant eating," writes Dr. Benjamin Hart, one of the authors of the study, which was published in the journal Applied Animal Behavior Science.

Dr. Cailin Heinze, a nutritionist at the Cummings Veterinary Medical Center at Tufts University, who was not involved in the study, shakes her head when asked to explain why dogs eat grass in general, and why some dogs vomit while others do not. "Lots of them do it, we don't know why," she said in an email. "Sometimes it is associated with nausea/vomiting, and sometimes it isn't. It doesn't seem to be associated with diet."

Perhaps Loretta and other dogs just like the taste of grass. Maybe they like the texture. Who can say for sure.

As for cats? Researchers in the same study found that grass-eating is also common in cats, and has nothing to do with upset stomachs or other illnesses. Most cats, like dogs, do not vomit afterward.

Whether they eat grass or not, my cats hurl all the time. Hairball? Hurl! Eat too much wet food? Hurl! Get chased by Loretta? Hurl some more! Find a mouse at night? Kill it, rat it and then hurl its mangled body on the carpet so I can step on it in the dark of morning.

I'm more of a dog person.

Now That's Interesting
Grass is 100 percent organic, yet most of it, 70 percent, is composed of water. Another ingredient is lignin, which is a complex polymer found in the cell walls of many plants. It's the stuff that makes plants rigid and woody. The amount of lignin in grass is less than wood. Grass also has a high starch content. Sounds delicious.