Should I really punch animals in the nose when attacked? 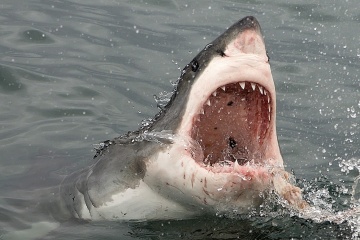 If a shark comes attacks, you may be able to get away by punching it - assuming you're focused and in the right state of mind.
webguzs/Thinkstock

If the person you were attacking punched you in the face, would it work? Some might say that getting punched in the nose hurts -- like, unreasonably so. Others would argue that it would merely incite their ire: After the initial shock, adrenaline would kick in, and they'd make even quicker work of their opponent.

When it comes to animal attacks, the answer pretty much lies with what kind of animal you're punching. (And let's just make it clear right now that unless you are being attacked, punching any kind of animal gets you a one-way ticket to a land called "Being A Bad Person.") So let's talk about a few different animals that have a reputation for needing a good stick in the nose.

The shark is the animal we most commonly associate with a sucker punch. The rumor is that a good, hard punch to the snout is going to send a shark reeling. There a couple of problems with this. One is that its super hard to punch anything underwater, making a good thump on the nose pretty unrealistic. Another issue: While shark noses are sensitive, their gills and eyes are much more vulnerable. Punching one in the nose probably won't do enough damage to stun it, and you've got the added problem of being a little too close for comfort to its enormous, gaping jaws [source: O'Connor]. So perhaps a "no" on punching sharks.

Another suggested victim for a punch in the nose? Bears. While in some cases it's wise to play dead around a bear (a grizzly or a mother defending her cubs), it's also certainly appropriate to try and fight off an aggressive bear. And while it's not a sure thing, punching or hitting the bear is certainly going to help you fight it off. Go ahead and clock it in the nose if you need to [source: NPS].

Of course, the animal that's really going to be useful to punch is one that has a crazy sensitive snout. So we present to you the animal that is most useful to wallop in the nose if it's attacking you: the star-nosed mole. With 100,000 sensory neurons, it's extremely sensitive to touch [source: Catania]. Luckily for all of us, the star-nosed mole probably isn't going to try to attack you, considering it's essentially blind and pretty peaceful [source: PBS].

Why do wildebeests spend their whole lives migrating in a circle?
In the Absence of Mates, Zebra Shark Just Births Her Own Clones
Why is the birth rate so low for giant pandas?