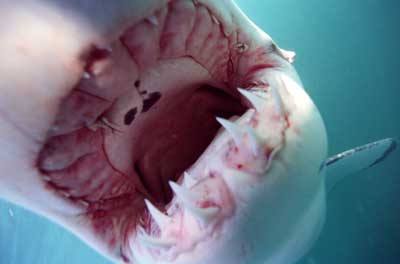 And what big jaws you have! Behold the gaping mouth of the great white shark. See more shark pictures.
Caroline Warren/Getty Images

Ah, the beach -- sandy refuge where people lounge, wearing little more covering than cocktail napkins. We flock to these warm havens to soak in the sun, read trashy novels and eat piles of cheese curls and chocolate chip cookies without a care in the world. That is, until we step into the water.

If there's one major party pooper on beaches around the world, it's the shark. Once we step off of dry land, we must keep a watchful eye out for nipping crabs, stinging jellyfish and of course the telltale fins protruding from the water's surface. Almost everyone has at least a mild case of selacophobia, or an abnormal fear of sharks. Fretting over the possibility of that silent approach and swift attack is probably one of the greatest downers from our fun in the sun.

Shark attacks happen in the waters off every continent, except Antarctica, with the U.S. topping the list. Nevertheless, the odds of being a shark attack victim are incredibly slim, but it happens. Every year, the International Shark Attack File compiles the reported human-shark incidents around the globe. In 2019, it recorded 64 unprovoked attacks, 41 provoked attacks and 12 boat attacks; five of those attacks were fatal [source: International Shark Attack File].

Let's say you're one of the select few that a shark spots in the water and decides to sample. Do people have any hope against the highest link in the aquatic food chain? In a majority of cases, that answer is yes.

Most shark attack victims will survive the encounter [source: Parker]. Reasons could be because a shark approached and decided not to pursue, it took a bite and left, or the person was able to physically fend it off.

In the event you come to blows with a shark, where should you hit or kick it? And are there other things you should do before giving a shark a knuckle sandwich? Find out on the next page. 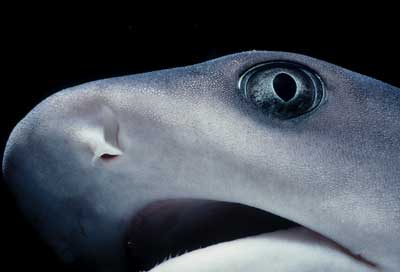 For more information about sharks and ocean safety, visit the links that follow.