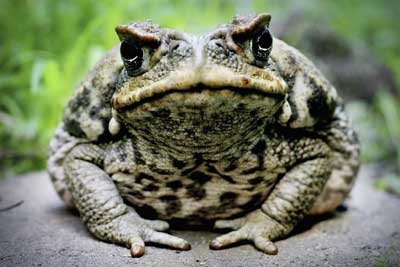 Australia is desperately trying to show cane toads the exit door. The 4-pound (1.8-kilogram) toads have thrived a bit too well on the island continent ever since their introduction in 1935. People brought the toads -- native to the warmer climates in the United States and tropical regions of South America -- from Hawaii to eastern Australia to perform pest control on scarab beetles that were ravaging sugar cane crops [source: Cameron]. It seemed like a good idea at the time since the beetles are a preferred snack of the cane toad.

Now the government has spent upward of $15 million trying to pinpoint an effective way to control the cane toads [source: ScienceDaily]. Why? These members of the frog family reproduce like gangbusters, with females laying 8,000 to 35,000 eggs at one time [source: Cameron]. Only a fraction of those hatchlings reach adulthood, but the population of cane toads has rapidly multiplied in Australia, and the pest controller has become the pest.

Aside from eating those scarab beetles, cane toads chow down on honeybees, beetles, ants, termites and even small mammals [source: Cameron]. When threatened, they also excrete poisonous venom that's strong enough to kill dogs and even humans. As a result, the Global Invasive Species Database lists the cane toad as one of the 100 worst invasive species in the world [source: Global Invasive Species Database].

The quest for finding an effective control agent has been tricky since the ­government doesn't want to decimate other frog or amphibian populations in the process [source: ScienceDaily]. Recently, scientists have isolated an "alarm pheromone" in these amphibians, which they hope will be the key to minimizing the cane toad population in Australia. When cane toads release this pheromone, or chemical messenger, it frightens other toads away from the area. In experiments, the pheromone literally frightened the tadpoles to death [source: ScienceDaily].

But not everyone wants to see the cane toad go. The cane toad holds a central place in certain psychedelic rituals some people practice in Australia. Are these just delusions of grandeur, or does the cane toad actually have hallucinogenic properties? Trip on to the next page for the answer, man. 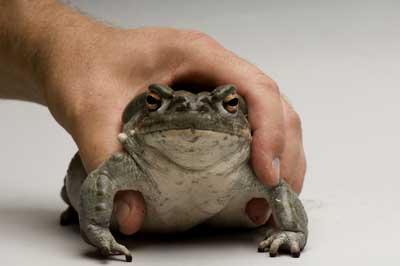