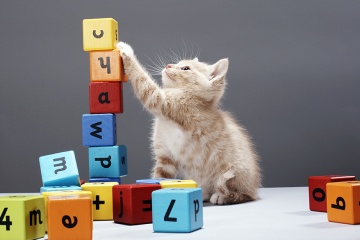 Can Fido really count? Just try showing him a few treats and then (clandestinely) stealing some a way. You might be surprised!
Martin Poole/Thinkstock

During the late 19th century, teacher Wilhelm von Osten made headlines when he put his horse on display to entertain curious audiences. The horse, known as "Clever Hans," could reportedly count and perform basic math calculations, giving the answer based on the number of times he stomped his foot. While audiences fell for the act, a keen-eyed psychologist spotted the deception behind this seemingly brilliant horse. Psychologist Oskar Pfungst eventually figured out that Hans was using subtle clues provided by both his owner and his audience to determine when to stop "counting" to arrive at the right answer [source: Radford]. Clearly, he was a smart horse, but counting was never really one of his skills.

Yet, while Clever Hans may have been a fraud, modern researchers have discovered that many animals are able to demonstrate some level of counting skill. For example, studies show that dogs can distinguish between different numbers of treats, and can count up to four or five [source: ScienceDaily]. If you place three treats on the floor and cover them with a screen as you take one away, the dog will notice the missing treat and spend time searching for it [source: Muir].

Of course, it seems intuitive that dogs would have some sort of mathematical skill given their close bond with humans, but what about other creatures? Studies of black bears have revealed that the bears can distinguish between differing numbers of dots on an image – they can't exactly count, but they do understand numbers and quantities to an extent [source: Dell'Amore].

The math skills of chimps are even more impressive. When Ohio State University professor Sally Boysen taught chimps to count, she discovered that they eventually figured out how to add and subtract on their own [source: PBS]. When a different group of scientists at the University of Rochester performed counting experiments with Rhesus monkeys, they found that the monkeys performed almost as well as college students on the test, and had a faster reaction time than their human counterparts [source: Tennesen]. When this Rhesus monkey experiment was repeated with pigeons, the birds performed just about as well as the monkeys [source: Gorman].

But what about even smaller or simpler creatures? Could they possibly count like their mammalian or avian counterparts? Studies of mosquitofish indicate that these tiny fish can distinguish between small quantities, but things get dicey when you head into big numbers like four or five [source: Agrillo et al].

Perhaps even more fascinating is the internal counter of the desert ant. Studies have shown that these ants somehow count their footsteps subconsciously every time they leave home to ensure they can find their way back. While it's probably not counting in the classic sense, it does indicate an unusual ability to process numbers in some manner, likely through a mechanism in the ant's central nervous system [source:Khamsi].

How Earthworms Work
The Brown Recluse Spider: Its Reputation Is Worse Than Its Bite
Frog Romance Just Got a Little More Interesting