What's the Difference Between Hibernation and Sleep? 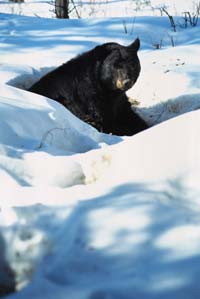 Biologists love to argue about how to classify things, and hibernation is no different. A common definition of hibernation is a long-term state in which body temperature is significantly decreased, metabolism slows drastically and the animal enters a comalike condition that takes some time to recover from. By this definition, bears don't hibernate, because their body temperature drops only slightly and they awake relatively easily. Not everyone accepts this narrow definition, however. For the purposes of this article, we'll use the term hibernation to describe any long-term reduction in body temperature (hypothermia) and metabolism during winter months.

When an animal enters a hibernationlike state during the summer, it's known as estivation. It's much less common than hibernation. Hibernation in reptiles is sometimes called brumation. It differs from mammalian hibernation because reptiles are cold-blooded -- they can't control their own body temperature, so they need to spend the winter in a place that will stay warm enough.

Torpor is another word that causes some confusion. It's sometimes used as an umbrella term to describe all the various types of temperature- and metabolism-reducing functions. More commonly, it's used to describe short-term periods of reduced temperature that occur as often as every day and only for a few hours at a time. This is the usage we will use to avoid confusion.

The poorwill is the only species of bird that truly hibernates. It drops its body temperature up to 60 degrees Fahrenheit and can live up to 100 days on 10 grams of stored body fat.
Tom J. Ulrich/Visuals Unlimited/Getty Images

So is hibernation basically a really long nap? No. These animals aren't just sleeping, they're undergoing physiological changes that can be very drastic. The most significant element of hibernation is a drop in body temperature, sometimes as much as 63 degrees F. We'll get into the details shortly, but for now it's sufficient to say that a hibernating animal's vital signs are very different from the vital signs of an awake animal.

Sleep, by contrast, is a mostly mental change. There are physiological aspects of sleep that are similar to hibernation, such as a reduced heart and breathing rate and lowered body temperature, but these changes are very slight compared to hibernation. Sleep is also pretty easy to break out of -- if you're awakened from even your deepest sleep, you can be fully awake within several minutes. Sleep is primarily characterized by changes in brain activity. In fact, the brain waves of hibernating animals closely resemble their wakeful brain wave patterns, though they're somewhat suppressed. When an animal awakes from hibernation, it exhibits many signs of sleep deprivation and needs to sleep a lot over the next few days to recover.

Zoo animals often live in environments different from their natural home, so they may not encounter the environmental cues that would normally set off their hibernation instinct. They're also fed every day and may be provided a warm place to hang out and sleep in. However, some zoos intentionally trigger hibernation in some species to give them more natural life cycles.