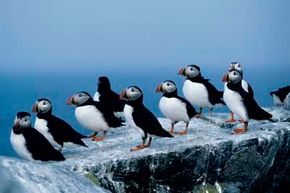 Consider the bagel and the doughnut. These breakfast treats are found in the same food group and share the same ringed shape. But the similarities stop there. Touch, smell or taste a doughnut and a bagel, and your senses will tell you that these breads are two totally different culinary creatures. People with savory tastes go for hearty bagels, while deep-fried doughnuts woo us with their siren song of sweet.

In the avian world, puffins and penguins are often lumped together because of their superficial similarities. To begin with, their names mean virtually the same thing. Ornithologists first used "puffin" -- which meant "fatling" at the time -- to describe Manx shearwater chicks, which they mistook for baby puffins [source: Project Puffin]. Once they realized the mix-up, they stuck with the original moniker. In a similar flub, penguins received their name after being confused with a now extinct bird called the great auk. The great auk's scientific name, Pinguinus impennis, comes from the Latin word "pinguis," which means "fat." From that, the chubby penguin received its name [source: Gaskell].

Certain physical characteristics of puffins and penguins make them appear more closely related than they are. Although puffins are shorter than penguins, barely breaking the 1-foot (0.3-meter) mark, they have matching white bellies and black overcoats. Both walk with a teeter-totter motion on orange webbed feet.

Socially, the seabirds have a lot in common, preferring to hang out and nest in large numbers. Although various terms may apply, groups of penguins are called colonies (rookeries refer to nesting penguins), and puffin clans are referred to as circuses and puffinries. Macaroni penguins may band together in breeding groups of up to 2.5 million birds [source: Reynolds]. Because they enjoy being around their own kind so much, puffins will readily approach wooden puffin replicas that ornithologists station at nesting sites in order to lure them in and observe their habits. In addition, both male and female puffins and penguins often mate for life.

But as much as we may adore each bird's awkward gait and smartly tailored feathers, let's get one thing straight: Penguins aren't puffins, nor are puffins penguins.

Penguins and Puffins: The Situation Isn't Just Black and White 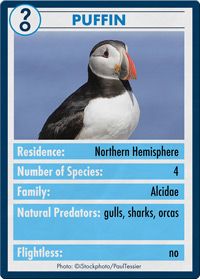 If you think that penguins and puffins perch atop a close set of branches on the avian family tree, think again. Genetically, penguins and puffins aren't siblings or even cousins. Penguins belong to the family Spheniscidae, while puffins are members of the family Alcidae. There are 17 different species of penguin and four species of puffin, without any overlap. In fact, they aren't even geographical neighbors. Puffins reside in the Northern Hemisphere, with about 60 percent of the global puffin population residing in Iceland [source: Project Puffin]. You'll find penguins on the other side of the world living throughout the Southern Hemisphere, from Antarctica to South America.

But the clearest distinction between these animals is flight. Puffins, which are much lighter and more compact, can fly. Thanks to penguins' chubby bodies and rigid wings, they're permanently grounded. To understand why that is, let's compare their sizes. You could easily tote a puffin around for a day since they weigh slightly more than a pound (0.45 kilograms) [source: Street and Emily]. On the other hand, carrying an emperor penguin that tips the scale at around 66 pounds (30 kilograms) would be like hauling hefty luggage.

If penguins can't fly, why do they have wings? Penguins' wings serve as underwater flippers to propel them hundreds of feet below the surface of the water. That's a beneficial trait, since penguin diets consist of fish and small crustaceans. During seasonal migrations, penguins get around by swimming instead of flying like their feathered friends. Penguins could give Michael Phelps a run for his money as well, with some able to swim faster than 20 mph (32 kph) [source: HowStuffWorks].

Puffins have a comparable diet to penguins, mostly consisting of small fish such as herring, hake and capelin. They propel themselves in water with their wings, just like penguins, but only dive under for 20 to 30 seconds at a time [source: Project Puffin]. While they may not swim as deep as penguins, puffins can stuff an impressive load of fish into their mouths to take back to their chicks. The roofs of their mouths are covered with small spikes to snag fish, allowing a record-setting puffin to jam 62 fish inside its beak at once [source: Taylor].

So who wins in the match-up between flying puffins and diving penguins? Until a penguin takes to the air, or a puffin performs underwater acrobatics, we'll have to call it a draw. Like bagels and doughnuts, you can't really judge which reigns supreme. 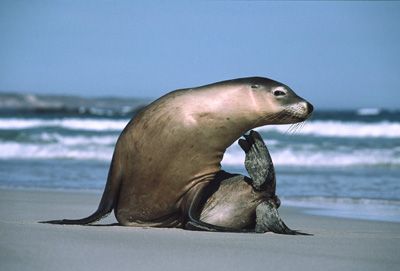 You May Like
What's the difference between a seal and a sea lion?
Explore More